​Venice always surprises you with new places to discover.
It is a unique emotion to lose yourself in its maze of streets and canals. It is here, in ateliers and workshops, that Venetian craftsmen – custodians of the Serenissima’s age-old history – still create wonders with their skilled hands.
They include master gold leaf-makers, glassmakers, rowlock-makers, tailors, goldsmiths, mask-makers, glass bead artists, engravers and printers, shoemakers, restorers, confectioners, milliners, and many more.

Venice invites you on a journey of discovery of the city’s inestimable creative heritage through ten itineraries that explore areas of traditional and artistic Venetian craftsmanship – ten walks to meet the craftsmen at work and immerse yourself in the most authentic Venetian way of life.

The “Venetian craftsmanship and creativity routes” have been developed by the City of Venice, in collaboration with the Cooperativa Guide Turistiche Autorizzate di Venezia, within the framework of the pilot action of the European project S.LI.DES - Smart strategies for sustainable tourism in living cultural DESTINATIONS, funded by the Italy-Croatia Interreg Programme. 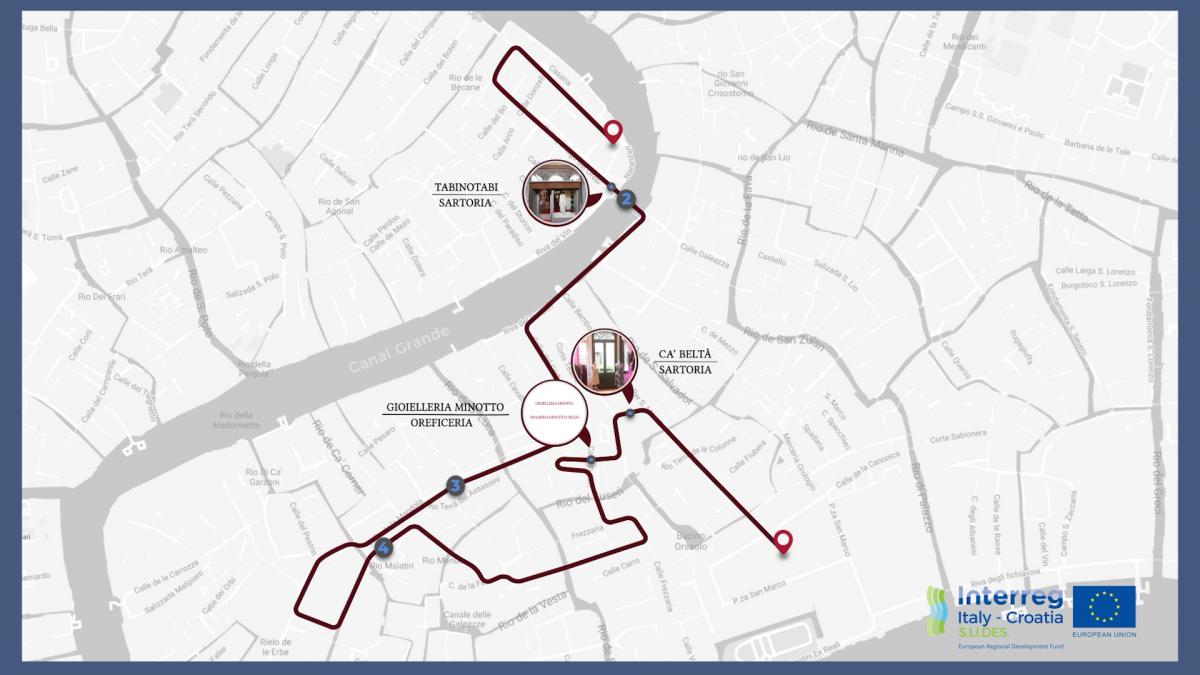 TRADE AND POWER BETWEEN RIALTO AND SAN MARCO

The walk starts in San Polo district, from Campo di Rialto, the ancient market’s area. Crossing Rialto Bridge, the walk goes on in San Marco district, where through little streets, squares and hidden corners you will arrive to Saint Mark Square.

You will get to know three workshops: Tabinotabi, a boutique of clothings and accessories on ecological and natural fabrics made according to the ancient Venetian weaving technique; Ca' Beltà, a tailoring atelier that makes tailored clothing for men and women like in 17th tailoring workshops, and Gioielleria Minotto, a jewelry workshop that presents exquisite jewels to an attentive and refined public. 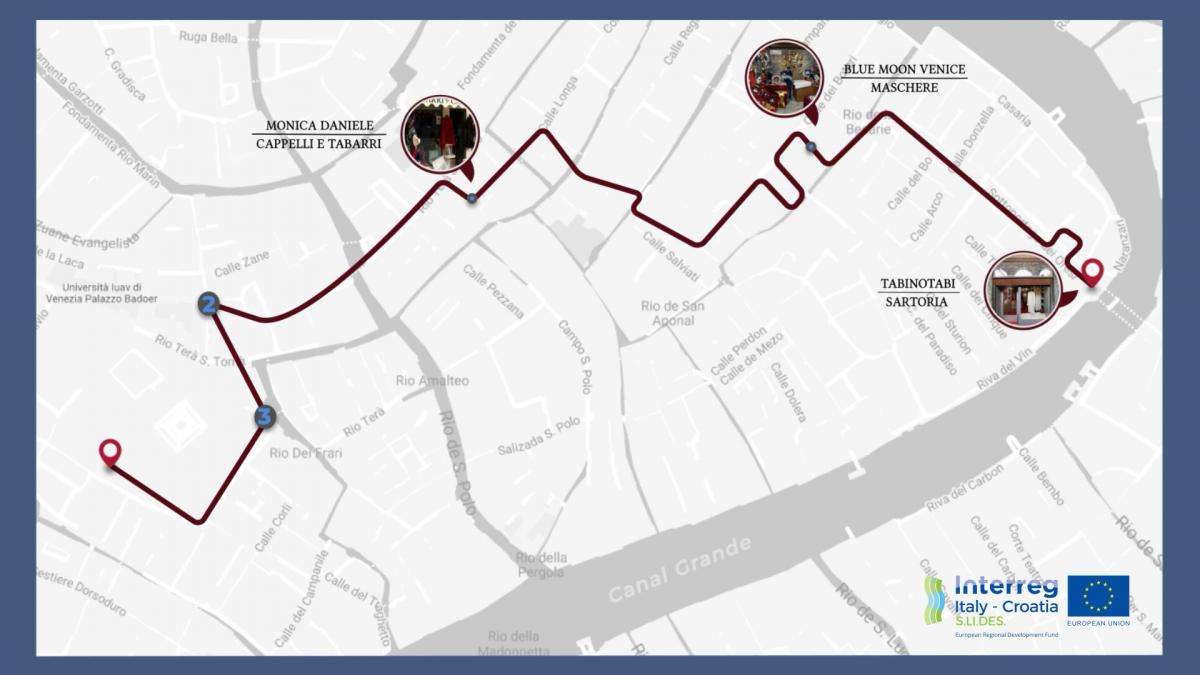 This itinerary takes place in the Sestiere of San Polo, it starts by Rialto Bridge and ends to the Scuola Grande di San Rocco.
In this district still are several artisanal activities like in the old days: you will visit three workshops that still continue with the Venetian traditions such as Tabinotabi, a boutique of clothings on natural fabrics made according the ancient weaving techniques; Bluemoon Venice, a masks’ workshop where the “mascarer”- the mask maker - will make you discover the secrets of these so fascinating accessories, and Monica Daniele, a boutique/workshop of hats and “tabarri”, the cloaks of Venetians aristocrats.

The itinerary will make you discover one of the six Sestieri of the city where you will have the opportunity to know more about Venetian history and traditions, for example the area of Rialto’s market that had been so important for its economical and social development since the time of the city’s foundation. A particular attention is given to the Venetian devotion including the Frari (Franciscan friars) Basilica and the Scuola di San Rocco, one of the six Scuole Grandi, Venetian merchants brotherhoods that had created a very efficient welfare system giving assistance and support to poor, sick and disinherited persons. 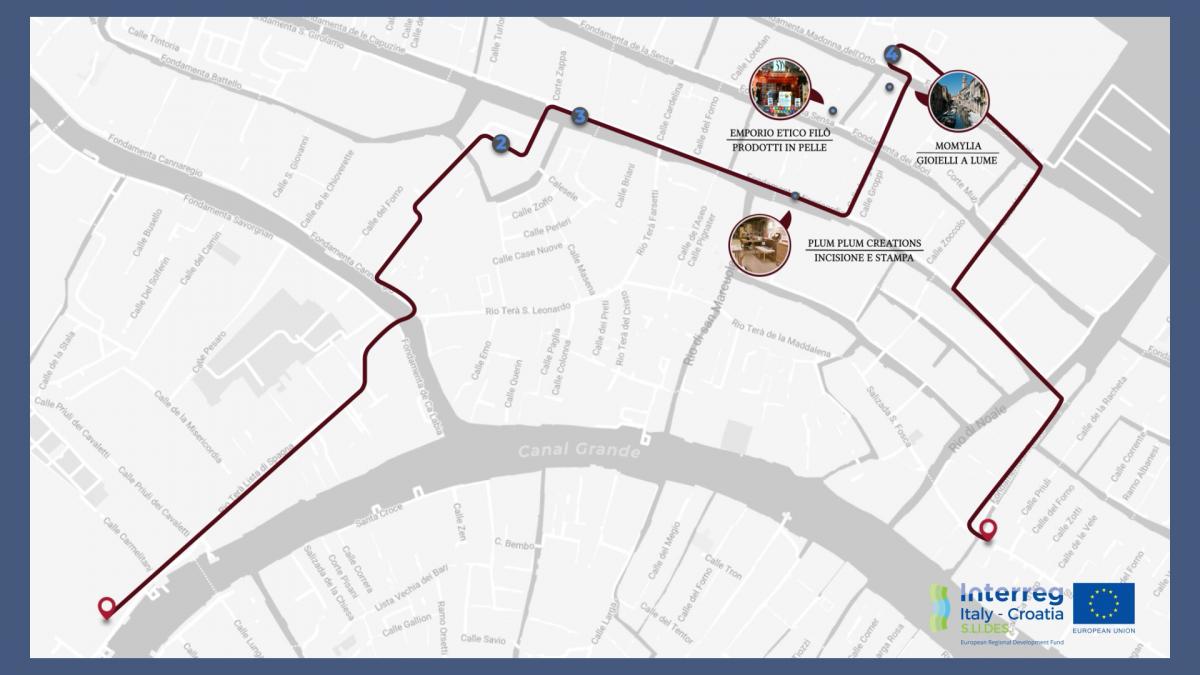 CROSSROADS OF THE WORLD: JEWS, MOORS AND CHRISTIANS

This itinerary takes you from the railways station Santa Lucia through the Cannaregio district, discovering places such as the ancient Jewish Ghetto and the synagogues, Campo dei Mori (where there are three statues dressed in oriental style) and the church of the Madonna dell'Orto, a treasure chest of masterpieces by Tintoretto, buried here. The route passes near several Venetian palaces, such as Palazzo Mastelli, with its camel carved on the facade, and Palazzo Contarini, with its beautiful garden, and before ending in Campo San Felice (where the church of the same name is located), reaches the Ponte Chiodo, the only one without parapets in the city, as it once was. 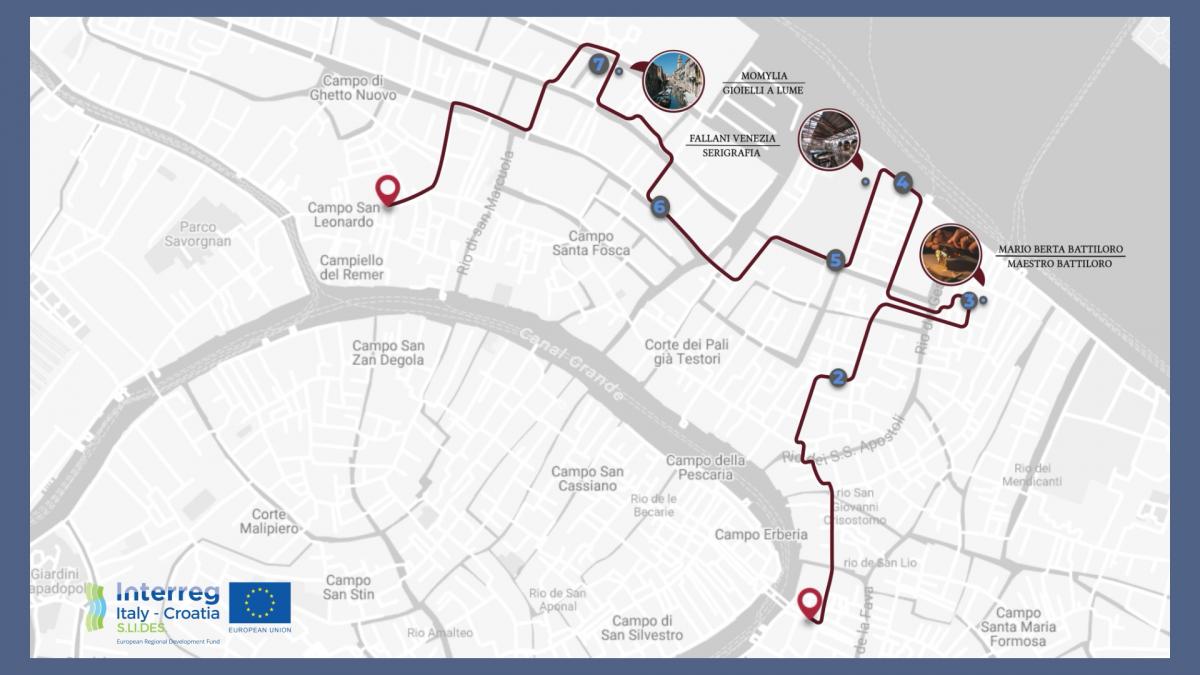 This itinerary starts from Rialto and leads to the discovery of a part of the vast Cannaregio district, including little-known places alongside others that are very popular with Venetians and tourists. The route takes you to Campo dei Mori and from there to Strada Nova: then you can choose whether to return to Rialto or walk towards the train station.

On your way you could find some traditional restaurants such as “osterie" and "trattorie" serving genuine Venetian cuisine, such as "cicchetti" (appetizers), “risi e bisi" (risotto with peas), fish risotto, spaghetti with clams as well as spaghetti with squid ink, garlic, oil, cuttlefish, parsley. As a second course you can taste the "sarde in saor", liver cooked the Venetian way, "baccalà mantecato” (creamy cod), or polenta served with the "schie", shrimps caught in the Venetian lagoon. 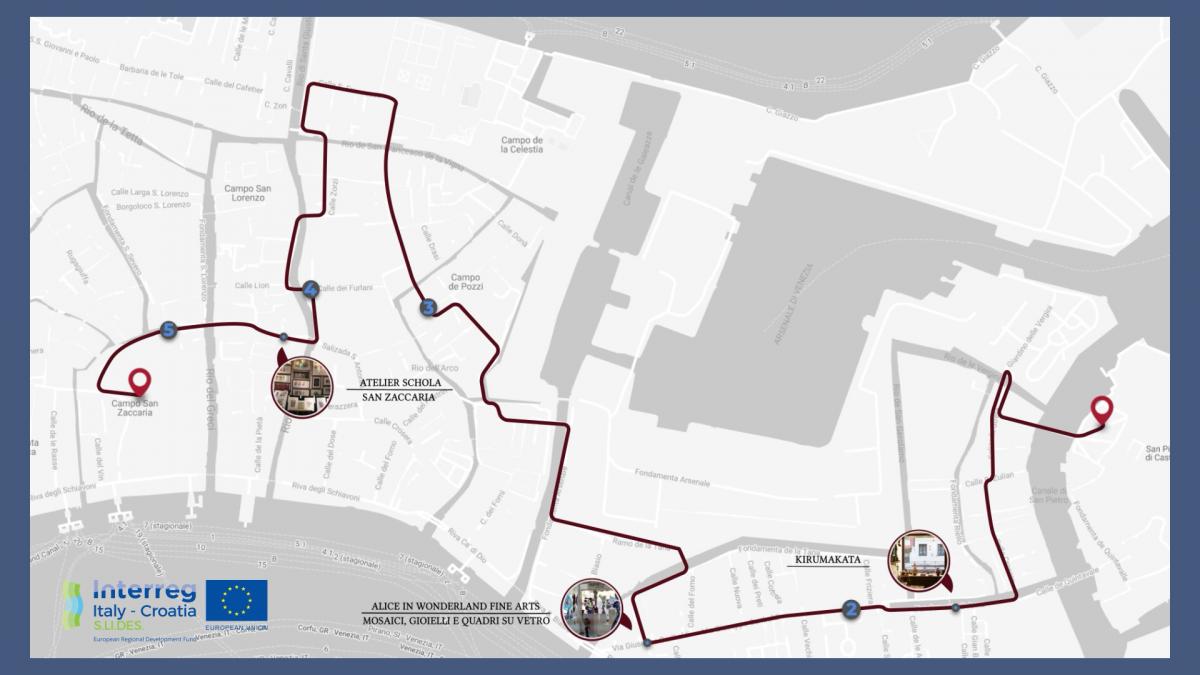 This itinerary is dedicated to the discovery of the less well-known parts of the Castello district, starting from the easternmost part of the city, the island of Olivolo, where the ancient Cathedral of San Pietro di Castello still sits. In the course of this walk, you will visit the area of the historical shipyard of the Serenissima Republic, where the maritime and commercial power of the city-state had its origins.

Visitors will also see the Scuole of some of the oldest confraternities such as that of San Giorgio dei Dalmati; hospitals such as the former Hospital of Saints Peter and Paul; monasteries such as the complex of San Francesco della Vigna, the church of the suppressed Benedictine convent of San Lorenzo, that of Santa Giustina and San Zaccaria.

On this itinerary you will have the chance to discover three handicraft workshops: Kirumakata, which produces jewelry using the ancient tecnicque called "lampworking", the Schola San Zaccaria, where paintings and frames are made, and Alice in Wonderland Fine Arts, a workshop where you can admire refined Murano glass objects, such as mosaics, icons and mirrors. 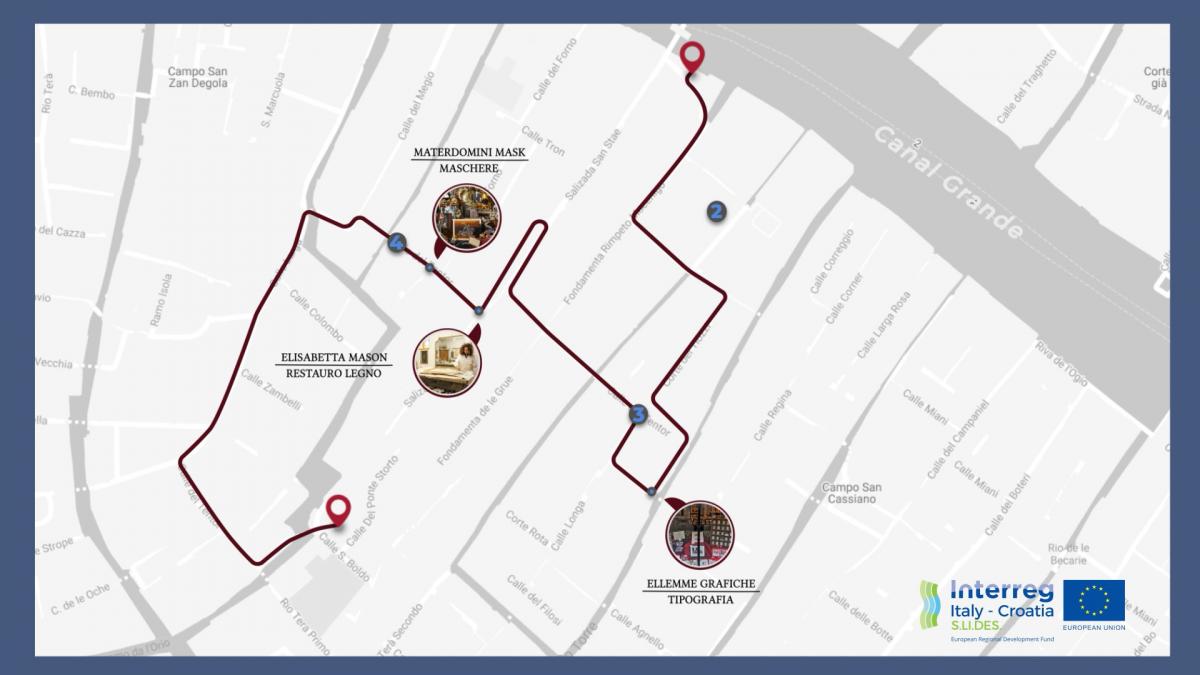 THE URBAN PLANNING AND THE MINOR ARCHITECTURE OF VENICE

This itinerary will explore some of the sights, churches and museums less frequented by tourists, with the aim of introducing and highlighting the more low-profile aspects of Venice.It begins with a visit to the church and the Campo of San Stae overlooking the Grand Canal and the exterior of Ca' Pesaro, which houses the International Gallery of Modern Art.

The itinerary continues along "fondamente" and "calli" to explore some aspects of the so-called 'minor' or domestic architecture that better than any other will make you understand the true urban fabric of Venice and its construction techniques. Examples can be found in Campo Santa Maria Mater Domini where you will see authentic houses/warehouses still perfectly preserved. Then, after a break at the Museum of Perfume and Costume at Palazzo Mocenigo, we will move on to the area of San Giacomo da l'Orio with its fascinating church and a visit to the insula of San Boldo.

This itinerary suggests the discovery of three handicraft activities: Mater Domini Mask, a craftsman which makes traditional Venetian masks; Ellemme Grafiche, an ancient typography, heir to the ancient and glorious Venetian tradition of book printing; Elisabetta Mason, a restoration laboratory which follows in the footsteps of another very old tradition, carving wooden frames and gold plating them. 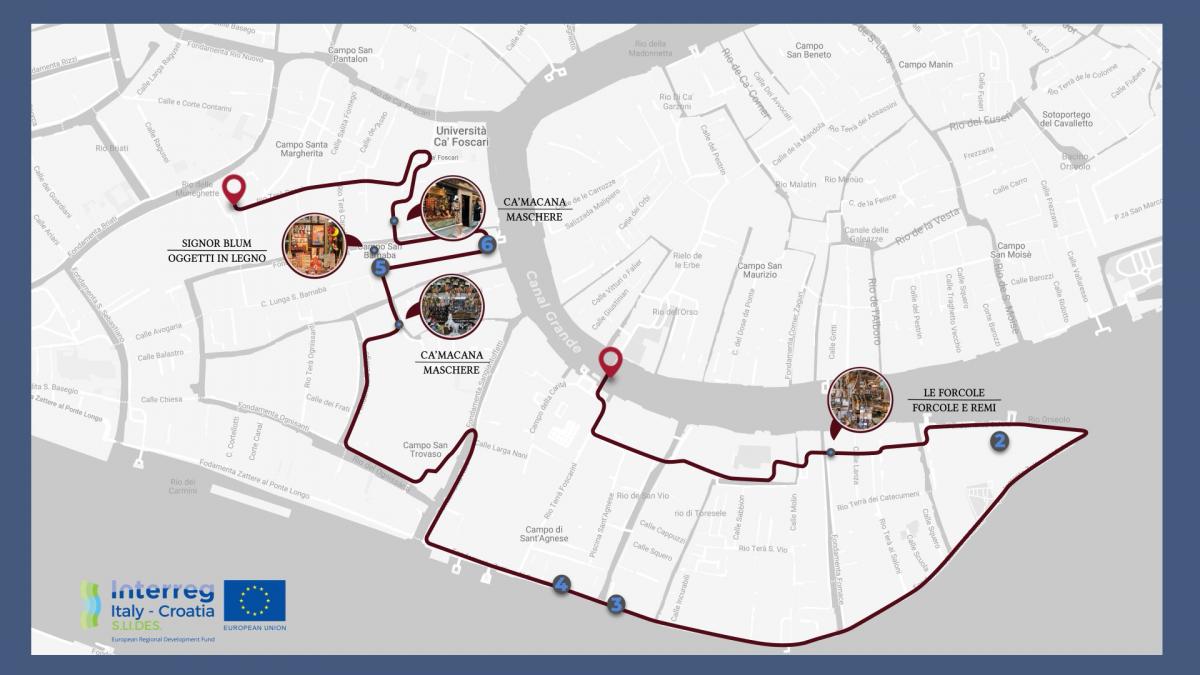 UNMISSABLE MASTERPIECES AND BREATHTAKING VIEWS IN AN ELEGANT AND BOHÉMIAN DISTRICT

This itinerary takes place in the sestiere (district) of Dorsoduro, from Ponte dell'Accademia to Campo Santa Margherita, highlighting three artisan stores, one of which has two locations not far from each other. In the course of the tour, it will be possible to learn about facts and aspects of the history of the city. Some the most important complexes that can be visited are the church of Santa Maria della Salute, Ca' Rezzonico and the Scuola Grande dei Carmini.

The name Dorsoduro, literally hard ridge, seems to derive from the fact that this part of the city was developed on higher and and more stable ground than elsewhere. The area was however further extended by means of land reclamation works that are evident especially in the first part of our itinerary in the area of Punta della Dogana, where a series of parallel and straight rii (small canals) connect the Grand Canal with the Giudecca Canal. 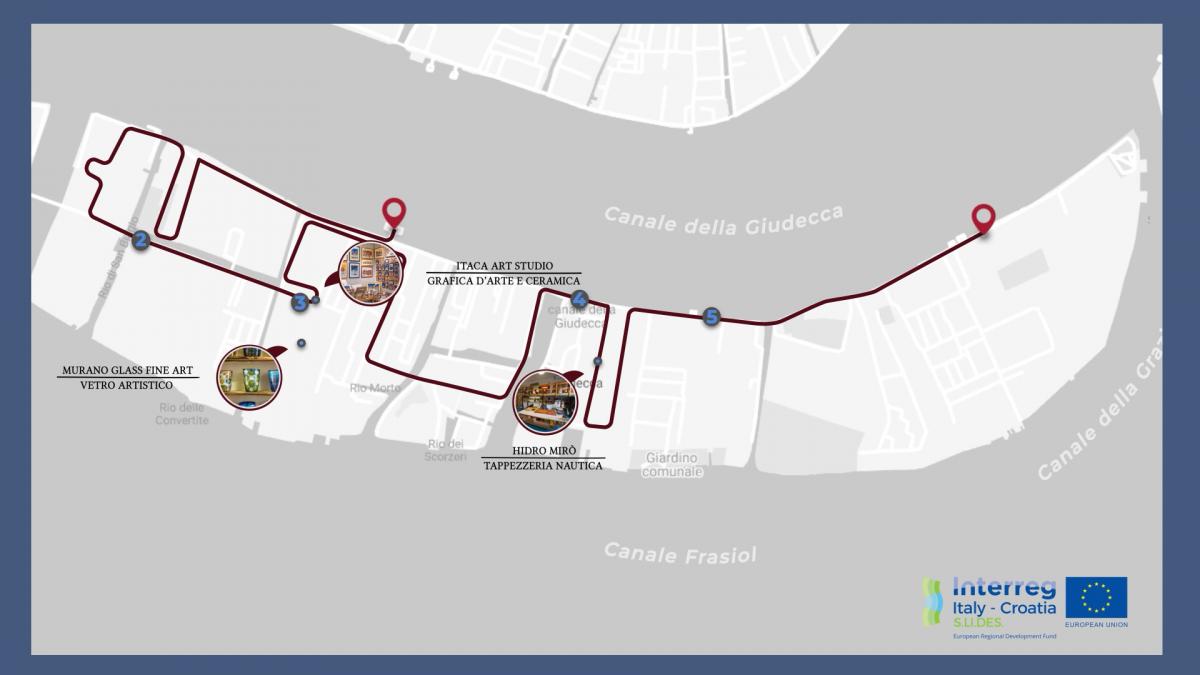 This itinerary takes place on the Giudecca starting from the Palanca vaporetto stop and ending at the Zitelle stop, and aims to present the island in its most characteristic aspects through a tour that includes a visit to three artisan shops and a walk through squares, gardens, ancient industrial buildings converted into newly refurbished spaces for daily life, ancient churches and monasteries.

Giudecca is a long and narrow island that runs opposite the south side of Venice from Zattere to the San Marco Basin. during the Middle Ages  the island was rich of tanners for leather processing. At the beginning of the 19th century, the island became the ideal location for the new industrial facilities that the city needed, including industrial plants, shipyards, factories, and workers' quarters, taking over its orchards, gardens, monasteries, and abandoned buildings. Today the island is a quiet residential area.

You have the chance to visit three handicraft workshops on this itinerary, starting with Itaca Art Studio by Monica Martin, a well-known and appreciated artist in town, who uses various techniques to create her paintings and pottery, which express her genuine and unique creativity. Murano Glass Fine Art produces all sorts of high-quality glass items using the lampworking technique, and Hydromirò is an important laboratory specialized in nautical interior décor and upholstery.

MURANO, THE ISLAND OF LIGHT

The itinerary takes place entirely on the island of Murano, located in the northern part of the Venetian Lagoon only twenty minutes away by water bus from Venice. The island has been unceasingly famous worldwide for its glass production since the 13th century. In fact, it was in 1291 that the furnaces for glass processing, initially located in Venice, were by Ducal edict, moved to Murano for the well-founded fear that fires - then very frequent in a city with buildings largely constructed with wood - led to its destruction.

Countless shops scattered all over the island displaying artisans lampworking glass are added to the relevant activity of factories where the glass masters individually work to create their masterpieces assisted only by a few helpers.

The itinerary leads to the discovery of the art of Murano glass working in the workshops of Marco Toso Borella and Matteo Seguso, two artist-craftsmen who decorate glass with the ancient techniques of "graffito" (scratching) and engraving, and in the showroom of Lorenzo Ferro, specialized in the production of artistic glass (in San Polo, Calle seconda dei Saoneri 2672 A/B). 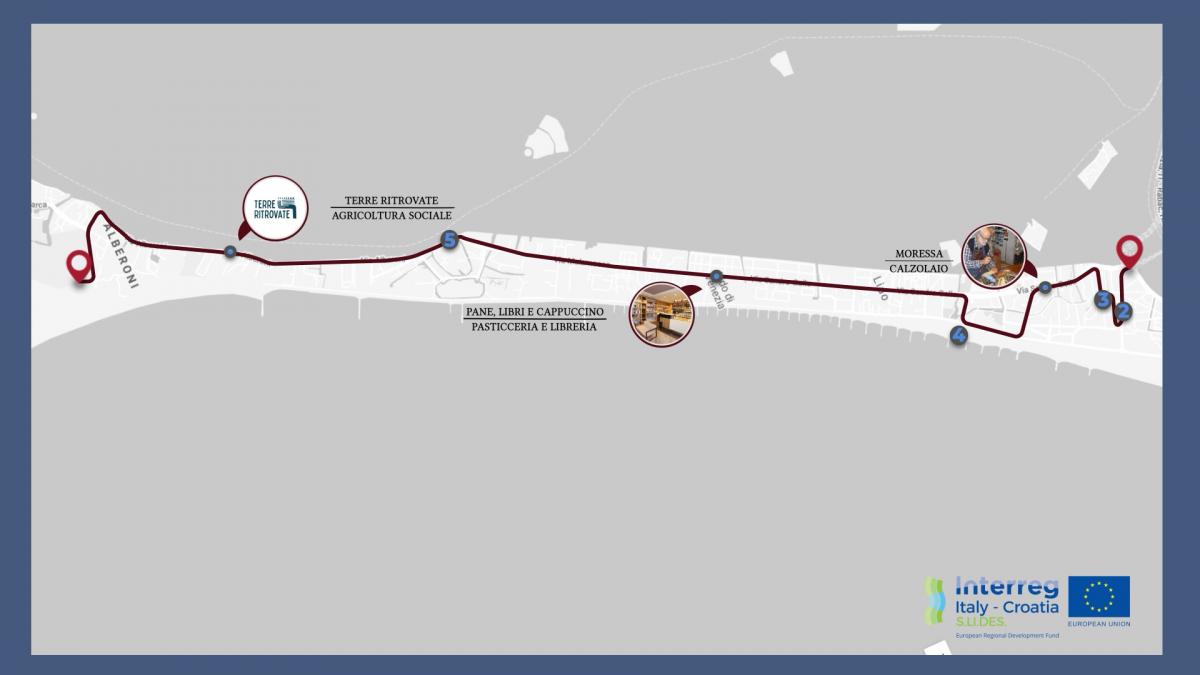 This itinerary takes place on the Lido di Venezia, an 11 kilometers long island between the Adriatic sea and the lagoon, to discover its art and nature. The tour starts by bicycle from Piazzale Santa Maria Elisabetta, at the waterbus station, on the Northern end  of the island, and ends at the  Alberoni, on the Southern end of Lido.

In the first stage of this tour you will find Liberty-style hotels and villas, built at the beginning of the XX century, when the Lido was a luxury seaside tourist center; then you will see the area where the famous Venice Film Festival takes place every year, and  you will also admire the sea, the beach and the ancient dykes called Murazzi: furthermore you will explore the old Malamocco village, and, following the panoramic route along the lagoon, you will arrive at the Alberoni, up to the WWF Oasis “Dune degli Alberoni”. During this tour you will visit craft shops and local honey production.

Along the way you will come across Art Nouveau hotels and villas, dating back to the early years of the twentieth century, when the Lido was a luxury heliotherapy and seaside resort, to then pass through the iconic places of the Film Festival, observe the sea, the beach and the Murazzi dams, explore the ancient village of Malamocco, and continue along the road that runs alongside the lagoon, to the WWF naturalistic oasis Dune degli Alberoni, among the wild sandy dunes.