This itinerary takes place on the Lido di Venezia, an 11 kilometers long island between the Adriatic sea and the lagoon, to discover its art and nature.

The tour starts by bicycle from Piazzale Santa Maria Elisabetta, at the waterbus station, on the Northern end of the island, and ends at the Alberoni, on the Southern end of Lido. In the first stage of this tour you will find Liberty-style hotels and villas, built at the beginning of the XX century, when the Lido was a luxury seaside tourist center; then you will see the area where the famous Venice Film Festival takes place every year, and you will also admire the sea, the beach and the ancient dykes called Murazzi: furthermore you will explore the old Malamocco village, and, following the panoramic route along the lagoon, you will arrive at the Alberoni, up to the WWF Oasis “Dune degli Alberoni”.

The Site “Venice and its Lagoon” has been inscribed on the World Heritage List since 1987 due to its Outstanding Universal Value, therefore it belongs to all of us: it is our common duty to respect it and preserve it so that it may be passed on to future generations.

The cultural heritage of the Site goes beyond the walls of palaces, churches, beyond islands and the lagoon, but is also memory, identity, community, all fundamental elements for the its vitality.

Listen to the audio tour 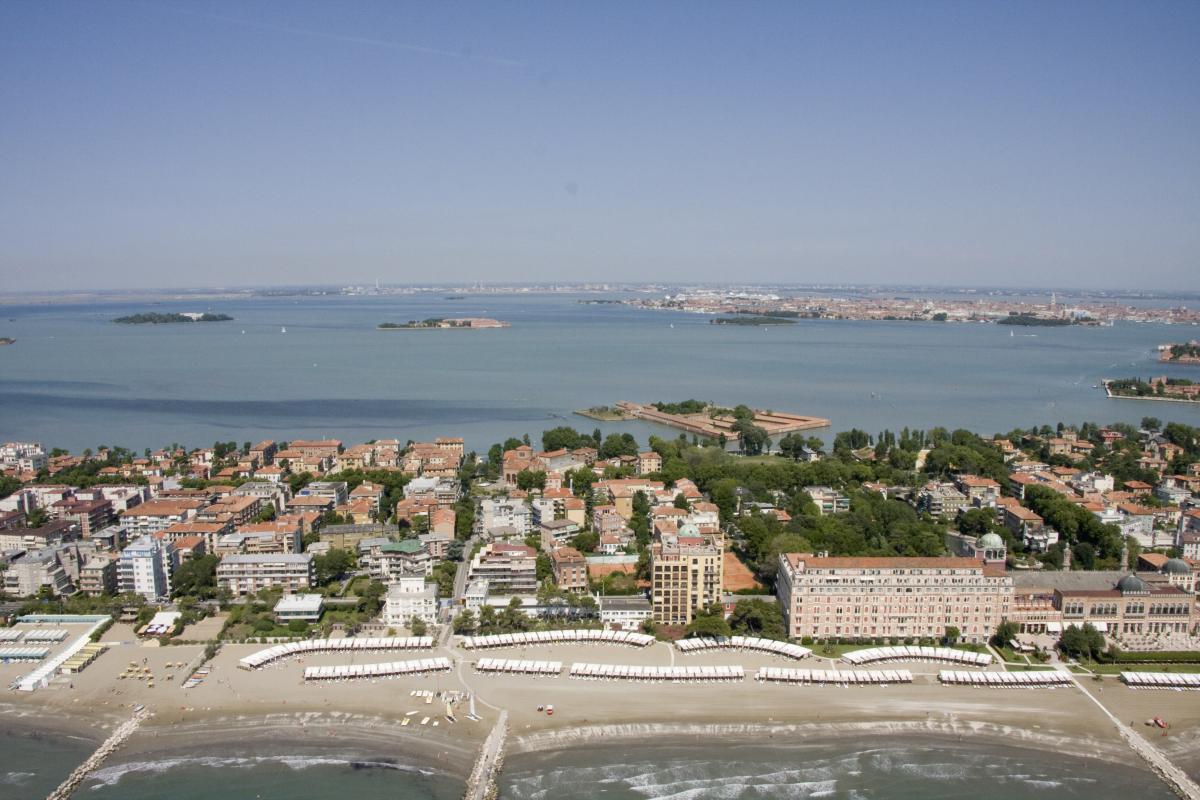 The Votive Temple and its green dome are the characteristic of Lido skyline. Designed by the architect Giuseppe Torres, the temple was built to accomplish a vow made by the Patriarch of Venice Pietro La Fontaine in 1917, during World War I. As Venetians did during the plague epidemics in the previous centuries, they wanted to build a temple for the salvation of their city. The decision to build it on the Lido was due to practical reasons: just before the war the island experienced an exceptional demographic growth and the small Santa Maria Elisabetta church wasn’t big enough, especially during the summer, as Lido was a famous seaside holiday town.

However the construction of the temple did not start before 1925, when more than 2500 larch poles were planted to reinforce the foundations, and ended in 1937. Anyway, the building that we can see is different from what the architect Torres had designed: the parts in brick between the pillars we see today were meant to be made of glass, to lighten the massive size of the building.

In 1929 the basement, which had already been completed by that time, became the Military Shrine in Venice, and has been recently included in the “Walks of Peace” itinerary, that connects the memorials of World War I and II in Italy and Slovenia.

From the Votive Temple, the tour continues from Via Corfù up to Gran Viale, Lido’s main street, connecting the waterbus pier with the equipped beaches. It was once an unpaved road where carriages were going back and forth. It was along this road that the first nice villas and luxury hotels were built at the beginning of the 20th century.

One of the Lido’s luxury hotels is the “Ausonia e Hungaria”, on the Gran Viale 150 meters on the left. Built in 1906 and surrounded by a wide garden, it was covered with colored faience tiles in 1914 by the famous ceramicist Luigi Fabris. The façade is decorated with bands of different colors: ochre, green and light blue, symbolizing earth, water and sky; female figures, allegories of land products, Venice and Hungary with their coats of arms complete the decoration.

The hotel was aiming at attracting a clientele coming from Hungary and Central Europe, so much that the restaurant menu was written in Italian, French and Hungarian. Following a restoration a few years ago, the “Ausonia e Hungaria” is now the only luxury hotel open all year round on the Lido. 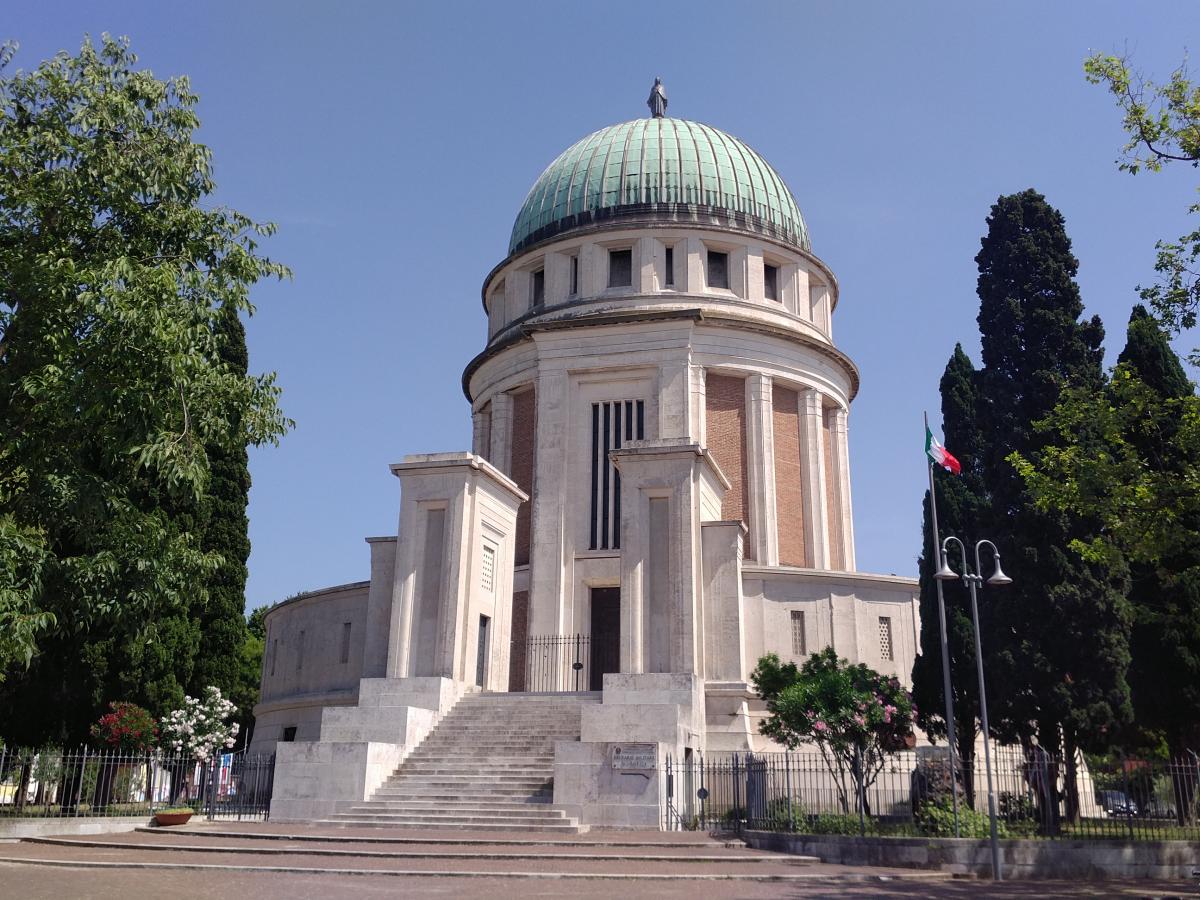 Proceed on Via Ascalona, at the right hand side of the hotel, and turn right in Via Doge Domenico Michiel. As this is a one-way street, you will need to push the bicycle by hand for about 200 meters, in order to respect traffic rules.

Once on Piazzetta Lepanto, you reach the bridge going to Via Vettor Pisani, on the other side of the canal. This is where you can admire three Liberty/eclectic style villas, built between 1906 and 1908 by the architect Domenico Rupolo. Like the numerous villas you find in this area, they are eclectic buildings, decorated in asymmetrical ways and in various materials. Garden gates are part of the decoration, and the ones of these three villas were made by Umberto Bellotto, a very famous wrought iron and glass artisan at that time.

Villa Otello, situated at the crossroads of Via Enrico Dandolo and Via Lepanto, was once a hotel. It is characterized by a remarkable asymmetry between the part where the rooms were, with many windows in Neo-Byzantine style, and the part of the common areas, with round arches and a fresco decoration under the roof. Two wrought-iron peacocks decorate the gate at the entrance.

On the opposite side of the canal, in Via Vettor Pisani, you find Villa Romanelli, built in eclectic Neo-Byzantine style, with wall decorations called “patere”, made of stone. Under the roof you can see the original fresco decoration. The doorbell and the gate at the entrance are in wrought-iron, with ribbon-like decorations typical of the Liberty style. The pillars of the garden have capitals decorated with colorful faience tiles.

Continuing in Via Vettor Pisani, there stands Villa Terapia, whose walls are plastered with bands of different colors and materials. The external stairs banisters are adorned with big bees in wrought-iron.

Back on your bicycle, turn right on Via Biagio Zulian, and then ride on to Via Sandro Gallo, to the left. 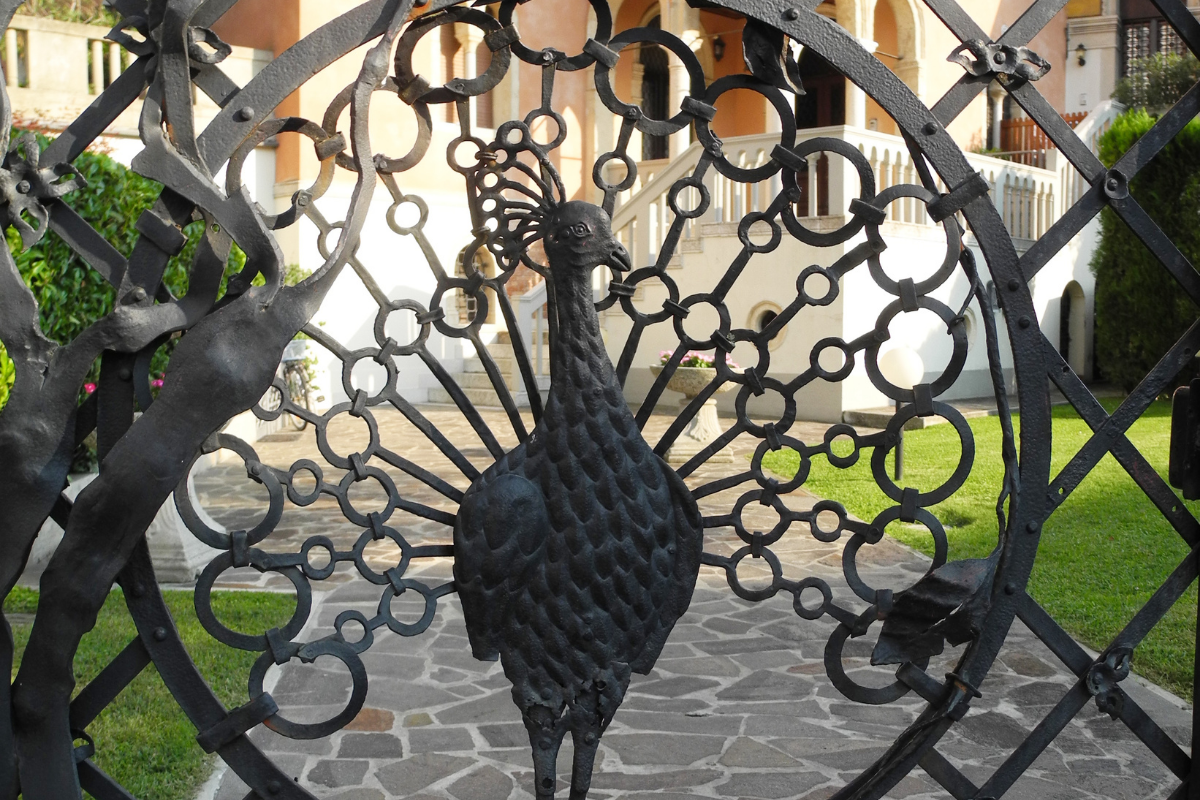 After about 250 meters, in between villas with gardens, houses with wrought-iron decorations, and a shop covered with faience tiles, you find “Moressa” at n.51.

The shoemaking workshop was opened nearly 80 years ago by the father of the actual owner, Antonio Moressa. Inside, you will find old pictures, tools, and the smile of a craftsman in love with his art. 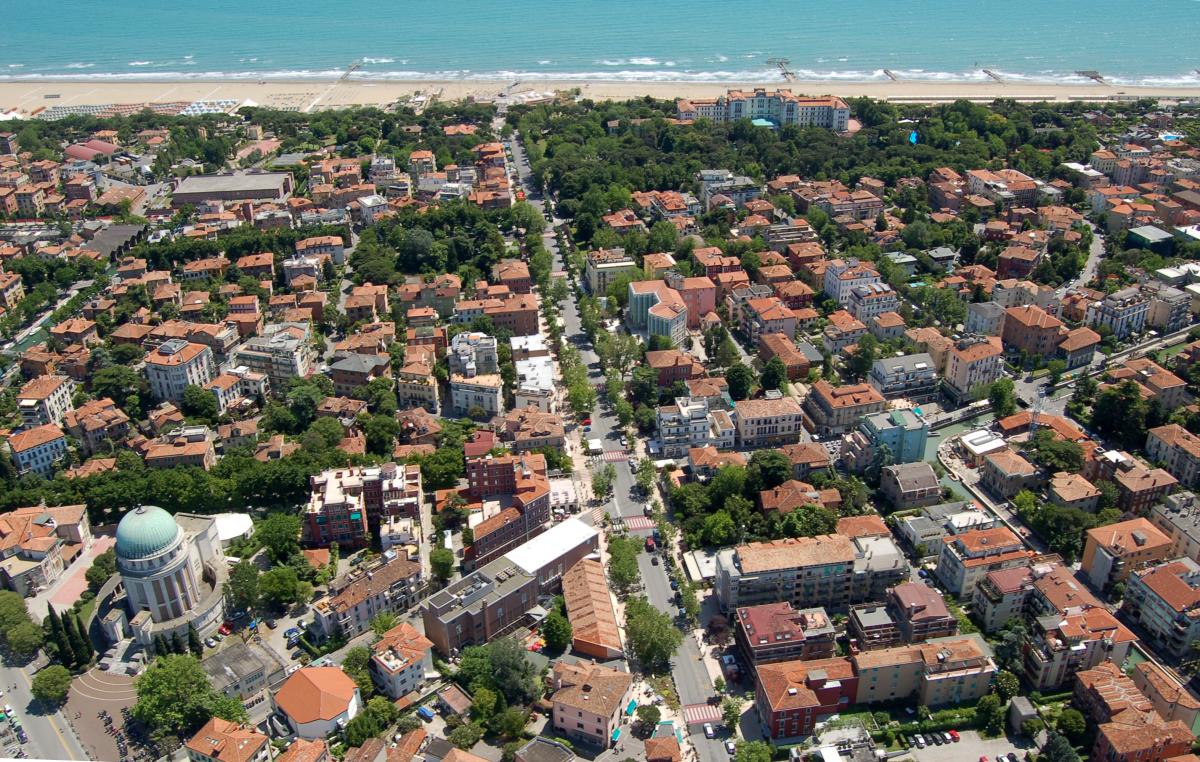 Stage 4: Piazzale of the Film Festival, terrace on the sea and the beach, Hotel Excelsior (5 minutes journey + 25 minutes)

After the visit, keep riding along Via Sandro Gallo, and take the first street to your left, via Lorenzo Marcello. At the end of this street, you reach the Lungomare Guglielmo Marconi, where you turn right, and after about 200 meters you will see the Piazzale della Mostra del Cinema.

Every year at the end of August the Venice International Film Festival takes place in this area between the Palazzo del Casinò, first seat of the Casinò of Venice, built in rationalist style in the 1930s, and the hotel Excelsior. The festival brings to the Lido international movie stars, and crowds of journalists as well as cinephiles.

In front of the “Palazzo del Casinò”, there is a panoramic terrace, where you can enjoy the view of the sea and the beach, with its “capanne”, beach huts that groups of Venetian families use to rent for the summer.

In August and September there may be traffic restrictions in place in this area, due to the setting up the Festival. So you may have to push your bicycle by hand, and the access to the terrace could be prohibited.

Less than 100 meters away, you find the hotel Excelsior, a huge Moorish-style construction built with pomp and great imagination by the architect Giovanni Sardi in 1908.

The hotel Excelsior and the hotel Des Bains, situated at the beginning of the Lungomare (closed at the moment), inspired famous film directors such as Sergio Leone and Luchino Visconti. Some of the scenes of “Once upon a time in America” (1984) were turned in the Hotel Excelsior and on the beach in front of it, while the hotel Des Bains was the set of the movie “Death in Venice” (1971). 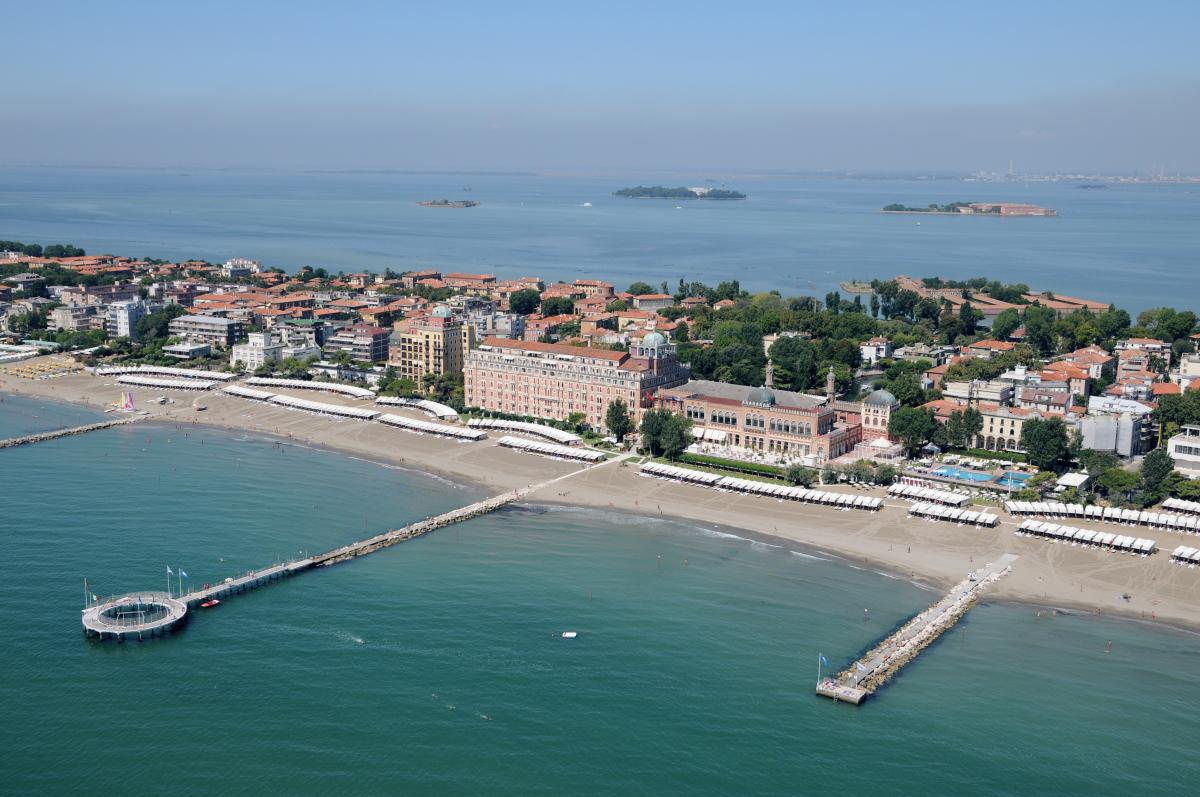 The tour goes on along the Lungomare and via Cristoforo Colombo, turning right. At the roundabout, take the third exit, and continue in Via Sandro Gallo up to via Giovanni Pividor, where you can see “Pane, Libri e Cappuccino” (tel. +39 0415269751 – www.panelibriecappuccino), bar and craft laboratory producing local traditional pastry and biscuits.

It’s the right place to have a rest, sitting and testing products made with love and knowledge, in a nice space, where the owner, Cosetta Scarpa, likes to create decorations representing a special theme (Christmas, Carnival, Spring) according to the season. The bar is open every day from 6 am to 9 pm.

Before you go back to your bicycle, you can walk 200 meters along via Pividor, to admire the sea and the Murazzi, ancient Istrian stone dykes built by the Venetian Republic in the second half of the XVIII century. 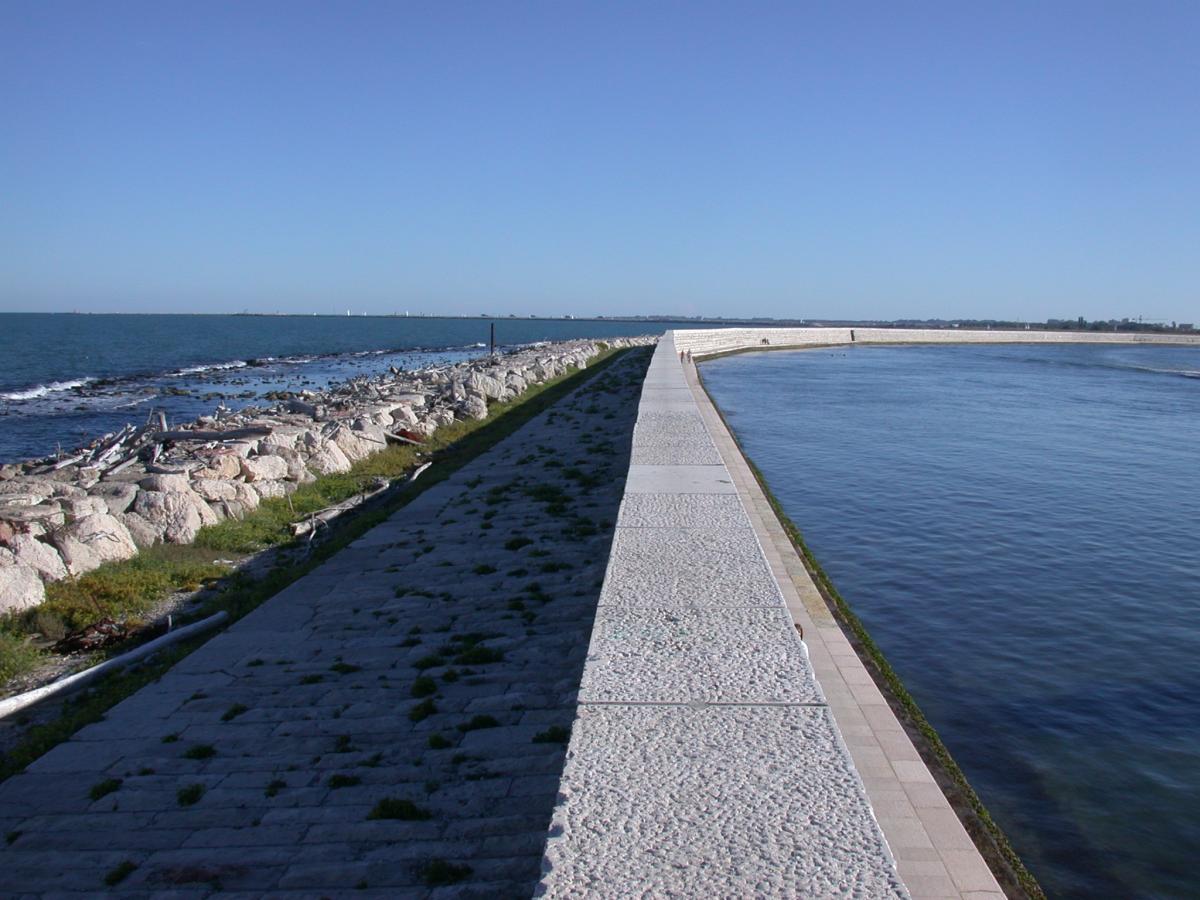 To reach Malamocco, continue on the left for about 10 minutes, riding on the cycle lane, part of the “Ciclovia E n°5”. The route from the Lido of Venice to Chioggia, passing through the island of Pellestrina and vice versa.

Malamocco is one of the oldest settlements of the Venetian lagoon. It was the Episcopal see in the VII century, and seat of the Venetian government in the VIII-IX centuries. The old part of Malamocco is surrounded by a canal, and by the magic atmosphere of an old village, where time seems to stand still. Leave your bicycles on Piazzale Malamocco and have a stroll in Rio Terà and Calle della Madonna… yes, the toponymy here reminds of the Venetian one!

In Campo della Chiesa admire the Church dedicated to Santa Maria Assunta, built in the XVI century, and the Palazzo del Podestà (XV century), decorated with coats of arms and a Gothic style three-mullioned window. Nowadays the palace houses the Municipality offices and a Permanent Exhibition of ceramic finds of the XII – XVII centuries, which were found during the palace restoration and also in other parts of Lido and Pellestrina. For opening times and visit information, you can call +39 0412760506, or +39 0412720543. 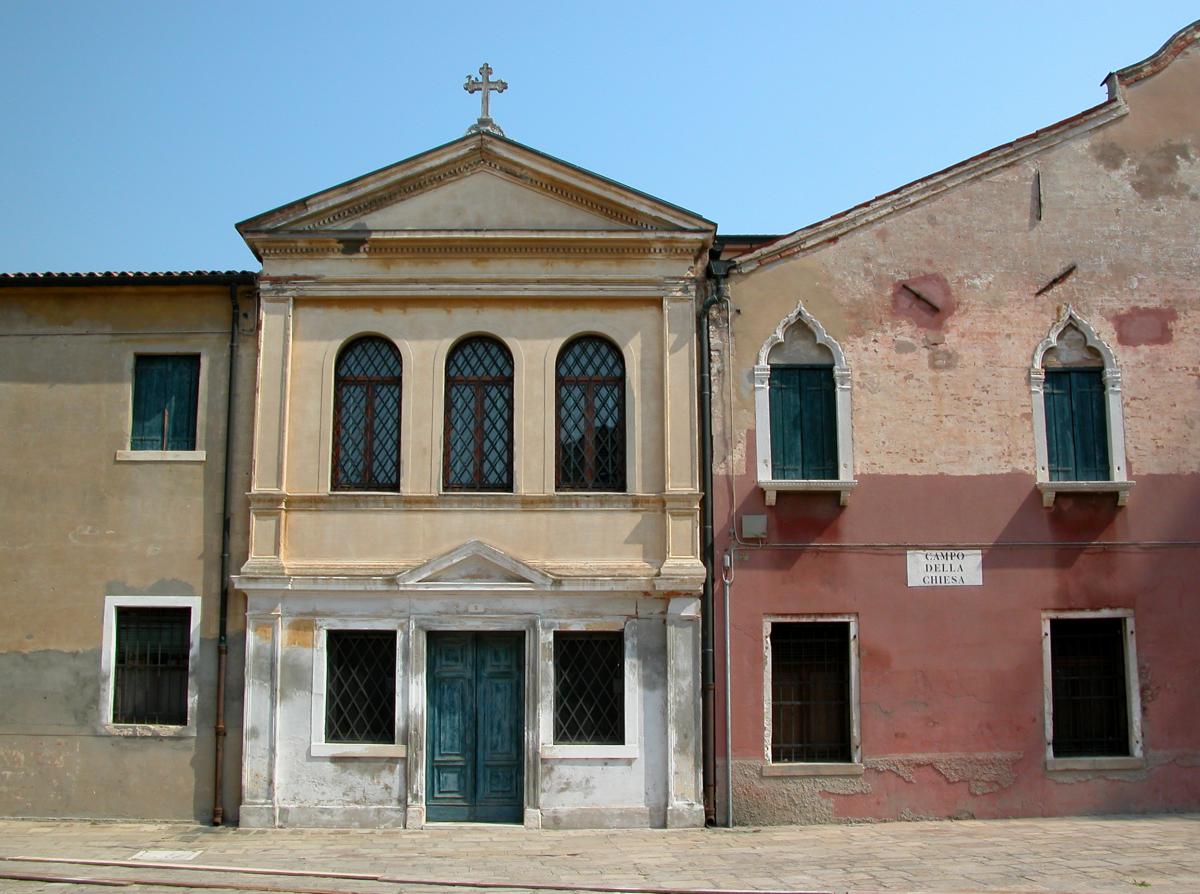 From Malamocco, the tour continues following via Alberoni, a nice street with maritime pines and a wonderful view on the Venetian lagoon.

At house number 53 (over the “Colonia Morosini'', and, after a small bridge, on the left) you can find “Terre Ritrovate” , an organic farm and beekeeping, producing local vegetables and honey. If you want to book the visit, please call a few days before the owner, Renato Garibaldi, at +39 3389938318, or write to: info@boscodimuseis.org.

After the visit, keep going along Via Alberoni for 10 minutes to reach the Alberoni, at the South end of Lido Island, where you can see the natural sand dunes, and the WWF Natural Oasis “Dune degli Alberoni”, Piazzale Bagni Alberoni. www.dunealberoni.it. 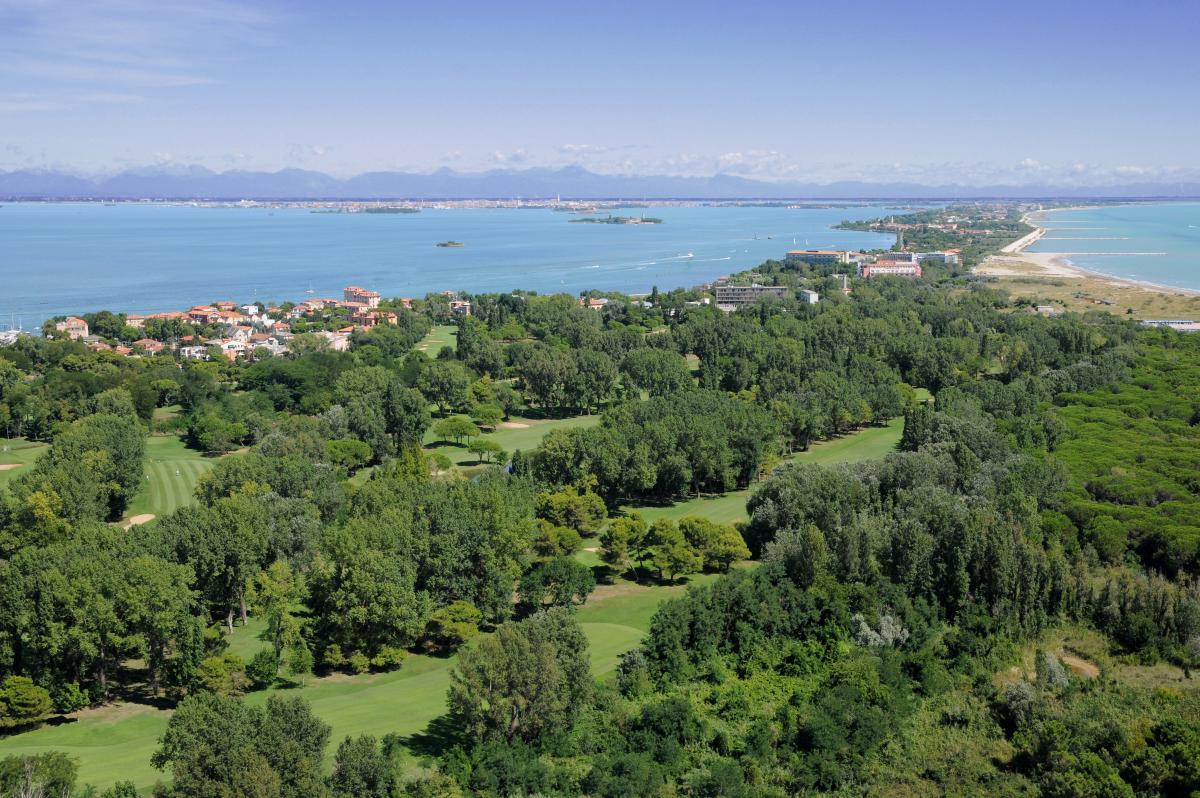