The Island of Giudecca

THE ISLAND OF GIUDECCA: FROM SACCA FISOLA TO SAN GIORGIO MAGGIORE

Originally called “Spina Longa” due to its fishbone-like shape, the Giudecca is the largest and closest island to Venice, from which it is separated by the broad and deep Giudecca Canal, in ancient times known as Canale Vigano. Some believe its name derives from the “Giudei” (Jews) who used to live there. Others instead take the etymology back to the word “Zudegà” (“the judged”/”sentenced”) when, in the 9th century, the Serenissima Republic ruled that plots of the island’s land be given to formerly exiled nobles who were returning to Venice. The quite large areas and the general peacefulness of the island also made it popular among religious communities (with seven monasteries being established) and, as had happened on Murano island, with patrician families who built palaces with lovely gardens and allotments there. After the fall of the Serenissima Republic, these areas were converted into warehouses, barracks, prisons, factories and workers’ quarters. Made up of eight smaller interconnected islands, the Giudecca has a long fondamenta or pedestrian quay running the length of its Venice-facing side. Its lagoon-facing side instead has many gardens and allotments, and new residential neighborhoods.
Our recommended itinerary starts on the island of Sacca Fisola, at the far western end of the Giudecca, from which it is separated by the Canale dei Lavraneri. To get there, take the Actv water bus No. 2, 4.1, 4.2 and N (night). Sacca Fisola is a recent residential neighborhood, this being what largely sets it apart from Giudecca’s adjacent main island. To reach the first stop of the itinerary, cross the large wooden bridge of the Lavraneri. On your left is the imposing Molino Stucky, an old mill which stands as a striking symbol of Venice’s industrial revolution and which is now a luxury hotel. Walking along, you will pass through the Campiello Priuli to reach the Fondamenta delle Convertite. By turning left, you will come to the first section of the fondamenta that extends along the Giudecca Canal. Opposite, on Venice’s main island, you can see the Stazione Marittima (harbour station) and fondamenta of Le Zattere. On the corner is the parish Church of Sant’Eufemia. A tablet embedded in the door reminds us of its consecration in 1371. The church has conserved its original simple-cabin structure (11th century) typical of the Veneto-Byzantine style, while the external Doric portico was built during the restructuring works of the 18th and 19th centuries. The portico columns, which date back to the 16th century, belonged to the Church of SS. Biagio e Cataldo, which was demolished to make room for the Molino Stucky. Above the entrance door is a beautiful relief of “Virgin with Child between Saint Rocco and Saint Eufemia”. On the inside, the three Veneto- Byzantine (11th century) aisles are decorated with sumptuous stuccoes and paintings (18th century) while the aisles and walls display works by B. Vivarini and G.B. Canal.
Continuing along the fondamenta, you come to the Chiesa del Santissimo Redentore (Church of the Most Holy Redeemer) (included in the Chorus circuit, discount with Rolling Venice Card) commissioned by the Republic’s Senate as a votive temple to Christ the Redeemer as thanksgiving for deliverance from the plague that decimated the population in 1575-6. The first stone was laid in May 1577 and the building was consecrated in 1592 (although not fully completed). The Santo Redentore (Holy Redeemer) has been celebrated annually ever since, on the third Saturday of July. During the period of the Republic, the doge and senators would attend Mass in the church, which was the destination point of the procession. The main island and the Giudecca continue to be joined annually by a pontoon bridge to celebrate this major Venetian festival. On the evening before, dining tables are set up along the Giudecca’s fondamenta to make merriment over traditional dishes, and to admire the spectacular fireworks display over the Bacino di San Marco. Designed by Andrea Palladio (1508-1580), and considered as one of the pinnacles of his career, the church was actually completed after Palladio’s death, by Antonio da Ponte in 1592. Inside, a colonnade extends around the walls of the single nave with three chapels opening on each side, and of the presbytery, which is surmounted by a dome. Paintings of the Veneto school of the 16th and 17th centuries decorate the altars. Of particular interest is the sacristy, from where access is given to the choir containing relics of the Franciscan order and several important paintings including a Madonna with Child and Angels by Alvise Vivarini; Madonna and Saints attributed to Francesco Bissolo; and a Baptism of Christ by Paolo Veronese. After the Redentore Church, we continue along the Fondamenta della Croce, named after the 16th century Chiesa della Croce, an area now occupied by a prison.
A short way along is the Church and Convent of the Zitelle. Built on a design by Palladio, the church is part of an ecclesiastic unit that the Jesuit Benedetto Palmio set up to help orphan girls. After his arrival in 1958, he had begun to provide for shelter to many such orphans in a house within the parish of Santa Marziale. To further his project, a more spacious building with adjoining oratory, was built. The works on the church began in 1581 after Palladio’s death and were completed in 1586 by Jacopo Bozzetto. Its consecration took place two years later as Presentazione di M. V. al Tempio. The Church of Santa Maria della Presentazione, also called of the Zitelle (the unmarried) is today one of the “Monuments of Venetian Assistance” found in the city, owned by “IRE” (Institutions for Shelter and Education).
To reach the last stop of our itinerary, the island of San Giorgio Maggiore, we must take the No. 2 vaporetto (water bus) from the Zitelle stop in the direction of San Marco-San Zaccaria. The 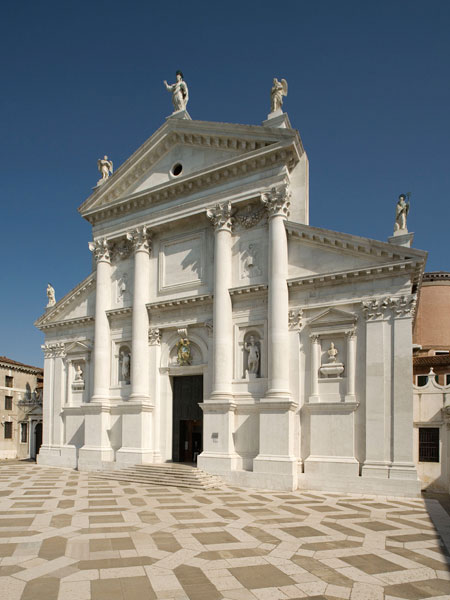 San Giorgio stop is opposite the Church of San Giorgio Maggiore, one of Andrea Palladio’s most significant works, which he began in 1566 but which was completed only in 1611, several years after the maestro’s death. The façade has two wings corresponding to the inner aisles that afford glimpses of the two large brick apses. The dome dominates the intersection of the solemn three-aisled interior, with broad transept. In the chapel on the right of the presbytery is a Madonna enthroned and Saints by Sebastiano Ricci (1708); in the presbytery on the main altar is a bronze sculpture by Girolamo Campagna (1593); on the walls are two works by Tintoretto: a Last Supper and Fall of Manna (1594). The sacristy allows access to the Chapel of the Deceased, which has become the ossuary of the Benedictine monks, whose relics were gathered there during demolition works. The chapel is thought to have once been the entrance to the ancient church. The alterpiece by Jacopo Tintoretto was one of the master’s last works. The wavelike compositional rhythm, seen with the flat vertical perspective of the primitive era, emanates a pathetic mood, almost to convey the Spirit abandoning itself to pain. Only the deterioration of the colours can justify critics’ doubts over the authenticity of this masterpiece. Above the chapel is the evening choir of the monks, which is accessed by a spiral staircase at the beginning of the corridor. The choir was made famous for its being used by the Conclave that elected Pope Pius VII in 1800. The names of the cardinals are written on their choir-stalls and some memorabilia of the Conclave are in a showcase. The altarpiece is a “St. George Killing the Dragon” by Vettore Capaccio. The Conclave room can be visited on request. Another monument belonging to the Benedictine part of the island is the Abbey of San Giorgio Maggiore, which was demolished and rebuilt some five times before taking on its grand appearance of today. For about one thousand years it was an important spiritual and cultural center and is still today one of the world’s most important monumental complexes. The square brick bell tower with cuspid topped by a swiveling Angel was erected in 1791 on a design by the Bolognese Monk Benedetto Buratti, to replace the old tower erected in 400 that collapsed in 1774. Of the part of the island managed by the Giorgio Cini Foundation – guest of the monastery since 1951 – visits can only be made to the two Cloisters of the Cipressi (cypresses) and the Allori (laurels), while the renovated Foresteria (exclusive guest quarters) is now used by the several institutes specialized in studying the Venetian civilizations. The Palladian refectory is today used as a lecture hall. The oldest part of all the monastery of San Giorgio Maggiore is made up of the dormitory and the cloister of the Buora, with its chapter house. We know that Cosimo de’ Medici found refuge on San Giorgio in 1443. He had been exiled to Venice with a court of friends and clients, among whom the renowned architect Michelozzo Michelozzi, who built the Benedictine library that was later pulled down in 1616 to make room for Palladio’s cloister of the Cipressi. In the vestibule, also attributed to Palladio, is a low flight of steps, which served as a secondment to the dining hall, which once housed Veronese’s gigantic canvas The Wedding at Cana now at the Louvre. In 1630, Baldassarre Longhena, architect of the Church of the Salute, remade the wing of the library and in 1642 added the monumental staircase to the apartments area of the Abbot’s apartments. Over the years, the halls of the Abbot of San Giorgio Maggiore have welcomed Henry III King of France, Queen Mary Casimira of Poland, Joseph II, Francis I, Frederick I, Emperors of Austria and many others besides. It was from the window of the grand hall, dedicated today to Pope John XXII, that the newly proclaimed Pope Pius VII performed his “Urbi et Orbi” blessing in 1800.