The Sestiere of Cannaregio

THE SESTIERE OF CANNAREGIO 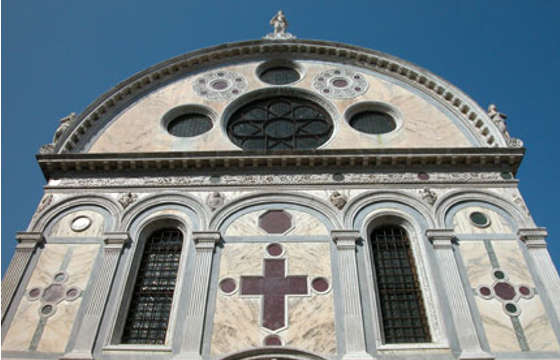 , it is the work of Pietro Lombardo and his workshop of pupils, who inside gave full vent to their artistic skills, providing us with a bewildering array of decorations, engravings, miniaturistically-carved stones and marbles, figures of animals and plants, processions of putti and mermaids, and of prodigious heads and friezes encircling the interior walls. Its polychrome marble facings enliven the elegant architecture of the sides and façade, which is crowned by a semicircular fronton. The interior is refined and elegant, with marble workings, lacunar vault, busts of saints, paintings by P.M. Pennacchi (1528), a raised gallery surrounded by parapet, all replete with fine sculptural decorations by Tullio Lombardo. The barco, or suspended choir above the entrance, has a Madonna with Child by Palma il Giovane. We retrace our steps towards Campo SS. Apostoli to end our walk.
Leaving Campo SS. Apostoli behind, we take the broad thoroughfare of Salizzada del Pistor and follow the recommended route exactly, until a broad square - the Campo dei Gesuiti - opens out before us. Crossing it, heading in the direction of the lagoon, before the church, on the right is the Oratorio dei Crociferi. It was probably founded in the mid 12th century by a small group of monks of the Order of the Crucifers from Rome. In their oratory in Venice, they provided the services of caring for the ill and giving hospitality to pilgrims. In the fifteenth century several renovation works culminated in the decoration of the oratory, entrusted to Jacopo Palma il Giovane, who completed his commission between 1583 and 1592. With strong realism, the eight tapestries on all the walls show the events linked to the history of the Hospital and the Order, along with some events of the Christian tradition, and liturgical episodes to which they were especially devoted. A short way on is the mock-Baroque Chiesa dei Gesuiti (Jesuits). Originally called the “church of the crucifers”, it was rebuilt between 1715 and 1730 by the Jesuits (the religious order that occupied the premises after the crucifers), with a Baroque façade based on Roman models. Dedicated to S. Maria Assunta, the church has a sumptuous interior decorated with marble inlays, and white and gold stuccoes. At the first altar on left is the Martyrdom of St. Lawrence by Titian (1558); in the altar of the left transept is an Assumption by a young Jacopo Tintoretto. The itinerary ends at the Fondamente Nove, offering views towards the island of San Michele (cemetery) and Murano. From here, regular public waterbus services serve the islands of the northern part of the Lagoon (see Itinerary n.6).