"The Venetian personality is joyful; their main defect is their greediness, but it's a friendly lively greediness." 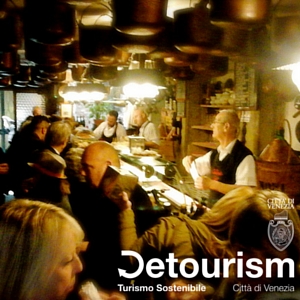 Venice and wine has always had a tight relationship. We have very old information on grape vine growing in our area (it was already growing in 40BC in the Concordia Sagittaria area). There have always been vineyards on the very strange, salty lands of the lagoon islands, and grapes were also grown in the centre of the city, as stated by the “nizioleti” (in English: thin bed sheets - i.e. place/street names written or painted in special rectangular shapes/frames forming real frescos). “San Francesco della Vigna” is an example. In addition, wines normally came from Serenissima landholdings on the mainland. An area that is still today dedicated to this type of production, and as if it weren't enough, Malvasia was imported from south-eastern Europe, and Aleatico from Greece.
It would be normal to ask, where was it all being consumed? One could drink at “bastion” where only wine was being sold, or in “furatole” i.e. very small popular shops where fried fish was also served. Or one could opt for “magazeni” which were wine bars and even sorts of pawn shops where “loans” were granted in exchange of items (two-thirds of the loan was given in cash and the rest in a low-quality wine called “vin da pegni” i.e. pawn wine). Finally we come to the “osterie” (inns) called “bàcari” or “bàcareti” (not called after Bacchus, but from the expression “far bàcara” i.e. to celebrate) where even today one can still get a decent glass of wine. In the 1700s, it was appreciated by Carlo Goldoni, in the 1800s by Richard Wagner, then by all us Venetians, and by curious “slow” style tourists like Ernest Hemingway.

Everyone knows that in Venice a glass of wine is known as “ombra” (shade) because once upon a time, it was sold and sipped while standing at the foot of 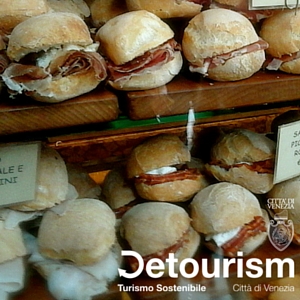 St. Mark's bell tower (known as “el paron de casa” i.e. the host). Vendors moved their stalls/kiosks and followed the shade to keep the drinks cool! Such an ever-present quantity of alcohol wisely evoked the consumption of local bàcaro products - “cichèti” (latin “ciccus” - a small quantity) during the evening pub stroll called “giro de ombre”. To keep clients sober, Venetian vendors that were ahead of their time, invented a type of street food. So, according to seasons and availability, the following cichèti appeared on the stalls: “folpeti” (boiled octopus), “castraure” (early season, violet-coloured baby artichokes from the island of Sant’Erasmo), croutons with “bacalà mantecato” (creamy salted codfish), “sarde in saor” (tasty sardines) - an emblem of Venetian fusion cooking, fried vegetables, cured meats, various cheeses, all the parts of quinto quarto (i.e. offal) from the “rumegal” little pieces of beef rumen), “spienza” (calf spleen), “trippa rissa” (herb-flavoured boiled tripe) “nerveti” (nerves served with raw onion). In more recent times, local myths have been created – like the mystery about the flavoursome meatballs of a certain osteria or of the “scartosso de pesse” (typical Venetian fried fish takeaway). I could tell you hundreds of stories, without considering the improvised compositions due to inspirations, innkeepers or even the “tramezzini” or sandwiches enlivening discussions among connoisseurs. However, what they all have in common, is that this food can be consumed informally, never alone, always standing up and without cutlery, because with a cichèto you must always have a hand free for a glass of wine: “l'ombra de vin”!
(Translation of an article from “Veneziani a Tavola” by P. Federici)

In 1431, Pietro Querini, ship-owner, captain and knowledgeable Venetian merchant, set sail from the island of Candia (today called Crete) with hundreds of barrels of Malvasia wine to deliver to markets in the Flanders. He sailed through the Mediterranean, passed by Gibraltar and headed towards the Hanseatic League cities in northern Europe, but a sudden tempest dismasted the ship and broke the helm. So, for weeks, the Venetian crew were at the mercy of the sea, until almost all the sailors died. The few surviving sailors, including Pietro Querini, passed the Arctic Circle and finally shipwrecked on rocks off the islands of Lofoten: “in culo mundi”, as can read from the ship log, the survivors were welcomed and taken care of, for four months by the island's inhabitants, who were fishermen with strange Nordic habits. According the 15th century Venetians who were somewhat sanctimonious, today it may be said that they were a little naïve, and innocent. They would sleep in a nude state, and both men and women would bathe together. And therefore, most certainly, in the “land of the midnight sun” our survivors took advantage of the situation, and we can see why. Many people now sustain that the residents of Lofoten have “Latin” or Mediterranean traits. (Some years ago, I was lucky enough to have nice holiday there, and honestly, I must say that the residents of the Lofoten and Vesteralen islands seemed like all the other Norwegians.) Apart from the beautiful women, what impressed Pietro Querini most, was the method used to preserve the codfish they caught. In his ship diary he wrote.. “stocfissi (stockfish)... when they want to eat it, they beat it with the back of the axe, which shreds it, making it look like nerves. Then they mix butter and spices to add flavour...”.
Even the return voyage was adventurous, but luckily, our heroes returned to Venice with a few samples of the sun-dried fish. To tell the truth, at the beginning, the Venetian noblemen didn't particularly appreciate the flavour: it seemed like food for the common folk, not good enough for the Serenissima. After that, in the mid 1500s, the Council of Trento decided that, that fish was good enough for days of abstinence from meat, and it then became a success. “Stoccafisso” originating from stokkfisk or the ancient Dutch word stocvisch, i.e “fish stick” is similar to “baccalà” or salted codfish, but preservation methods are different and the flavour is decisively different. Irrespective of this, and who knows why - in Venice, stockfish is called “bacalà” and without the pronunciation of the double ll's. 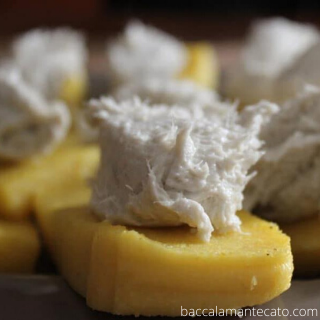 Put the stockfish in a saucepan, cover with slightly salted water and bring to boil. Cook for approx. 20 minutes with lemon and the bay leaf. “Cream the fish pulp with a wooden spoon or mixer, (avoid using a food blender - in case, using the plastic blade!) adding oil very slowly, while letting it absorb, as if making mayonnaise, thus obtaining a smooth, thick, shiny paste with some pieces of fish left whole. The quantity of oil depends on the quality of fish being used. Add salt and pepper to taste, and eventually even a little of the cooking water. Traditionally the dish is garnished with chopped parsley and accompanied with hot (even grilled) polenta. Preferably the polenta should be made from Marano maize or “bianco perla” - a Venetian clone.

(Translation of an article from “Veneziani a Tavola” by P. Federici)