The Lido, for Liberty-style gardens and natural oases

The Lido, for Liberty-style gardens and natural oases

The green heart on an island between the city and open sea.

Popular with residents and tourists because of its golden sandy beaches and the Venice International Film Festival, the Lido encloses a rich patrimony of gardens and natural oases to be discovered on foot, by bike, and even out of season.

Located between the lagoon area and the Adriatic Sea, up until the mid 1800s, this 11-km-long island was farmland with scattered gardens, vineyards, fields of artichokes, and even stables, canals, windmills and wells near military guard-towers and placements, that made up part of the lagoon's ancient defence system.
The Lido's first bathing establishment was inaugurated on the Eve of San Giovanni in 1857, and the beach became known as one of the most exclusive, after becoming popular with royalty and famous actors, artists, etc. during the next few decades.

The rural landscape was progressively wiped out and replaced with eclectically designed villas and hotels – with unusual Romantic, Byzantine, Gothic, Renaissance or even mountain-style elements in cement, wrought iron, Murano glass and ceramics from Bassano and Treviso, all skilfully integrated by architects and artisans.
Through the fences, at the water's edge, near the roads and avenues traversed by pedestrians, bikes, and vehicles, you can catch a glimpse of the shady, secret, elegant gardens, surrounding the buildings.
Liberty-style, floral decorations blossom all-year-round on the staircases, terraces, turrets,and lodges; also from pergolas, vases, statues, and benches. Fine gravel tracks winding through domestic pines and sea pines, Lebanon cedars, magnolia trees, holm oaks, yews, palm trees and pittosporums. Flower beds edged with box shrubs and thick convallaria awaiting seasonal flowering, and small ivy coverings here and there.

From April onwards, picturesque bunches of lilac and white wisteria, snow white Jasmine and black locust flowers perfume the air; healthy oleanders catch the eye with their colours; bindweeds and morning glory grip tightly with their colourful bells; romantic roses reach to the sun; American and Canadian creepers turn red in autumn.
The facade of the Grande albergo Ausonia & Hungaria - recently restored - covered with splendid majolica ceramics showing off female figures and multi-coloured plant motifs can be seem among the foliage of plane and maple trees in Gran Viale. It is one of Luigi Fabris's (from Bassano) works of arts, covers a record 800 square metres!dimensione record di 800 metri quadrati! 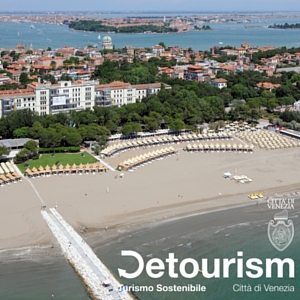 At the corner with Lungomare D'Annunzio there is a vast area of scrubland of pines, cedars, cypresses, yews and magnolias: this woodland has been redesigned as a park with a great variety of trees. It is the work of landscape architect, Tramontin, to protect the privacy of former Hotel des Bains guests; made famous by writer, Thomas Mann, and afterwards in Death in Venice directed by film director, Luchino Visconti. Shady vegetation clearing up near the swimming pools, redesigned by Pietro Porcinai between 1968 and 1971.
The Albergo Quattro Fontane (Four Fountains Hotel) garden is full of flowers. The hotel name recalls the underground cisterns where the rainwater filtered by the dunes was once collected. Near the Barchessa built in the sixties, by Alfeo Pauletta di Pola for the Bevilacqua family is an unexpected chalet, an early twentieth century work by Giovanni Sicher. The old casino with some still - visible, 16th century elements/characteristics, designed by Gian Antonio Rusconi and Andrea Palladio for nobleman, Daniele Pisani, was a pleasant meeting place for conversations among the vineyards, and in the late 1800s a popular tavern for poets and artists including Robert Browning. 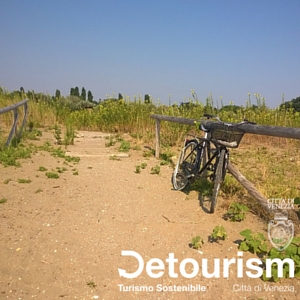 An absolutely green area of the Lido is the Circolo Golf Venezia (Venice Golf Club), established at the beginning of the 1930s by Count Giuseppe Volpi di Misurata, then President of the Compagnia Italiana Grandi Alberghi (Italian Association of Grand Hotels): an area with sea pines, willows, poplars and mulberry trees covering more than 100 hectares, all around an Austrian fortification, at Alberoni, in the southern far end of the island.

Not far away, for lovers of natural and wilder settings, there is the Alberoni Sand Dune Oasis - a unique environment used as a stopover and winter habitat for numerous birds. Then, for two kilometres, bare beach, the shifting dunes with hardy vegetation, inland dunes with arid land and flora similar to that of the Steppes, and finally the damp wastelands  between the dunes.

Behind you, is a 30 hectare pine grove, established as a reforestation project in the post-war period.
Another treasure of biodiversity is the Nature Reserve towards the North, in the San Nicolò area, at the other end of the island. Behind a steep, windy beach, typical coastal vegetation surviving in sand, lashed and encrusted with sea spray, washed by rain, and exposed to the intense evaporation of the sun and wind. An “extreme” environment bringing us back to the Lido's origins.


Getting to the Lido 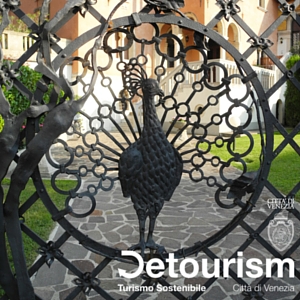 Getting around on the Lido


Reading suggestions before you go 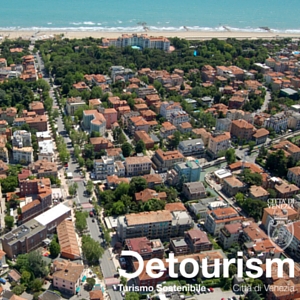 •    Lido architecture – from Liberty to the fifties, an online catalogue by the Lido Pellestrina Municipal Council (in Italian)

The Lido – History and Liberty (in Italian)
www.turismo.provincia.venezia.it/turismoambientale/cd_1/itinerari/lido/lido.html