The Marriage of the Sea enchants yet again! 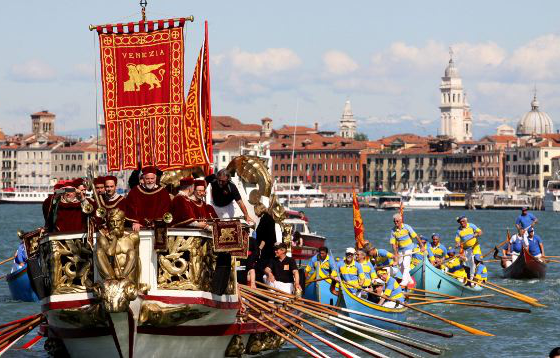 Each year Venice beckons millions of tourists attracted by world-famous events. The most prominent among these is the Festa della Sensa (Feast of the Ascension). Tourists relive the age-old history of the Serenissima Republic and its intimate relationship with the Sea, and the customs and traditions of Venetian Rowing.

The Festa della Sensa or Ascension of Christ was a feast day for the Republic of Venice. “Sensa” in the Venetian dialect means “Ascension”. It commemorates two important events for the Republic: the 9th May 1000AD when Doge Pietro II Orseolo helped Dalmatian inhabitants threatened by the Slavs, and the second event, connected to 1177AD, when Venice was ruled by Doge Sebastiano Ziani. At that time, Pope Alexander III and Emperor Federico Barbarossa met in Venice and stipulated a peace treaty, ending a century-old diatribe between the papacy and the Imperial Reign. The Wedding ceremony of the Sea is held in remembrance of this event each year, and, from that date each year, the Doge, on his state barge - the “Bucintoro”, would sail to San Pietro di Castello at St. Elena, where the Bishop would be on board a gilt-edged boat, waiting to bless him. To highlight the dominion of the Serenissima over the sea, the Feast ended with a type of propitiatory rite: on reaching the lagoon inlet, the Doge would throw a gold ring into the water.

Thanks to activities organized by the “Festa della Sensa” committee, Venice has been celebrating the event since 1965, with a water parade of traditional rowing boats organized by the Coordinating Committee of Venetian Rowing Clubs. At the head of the parade is the “Serenissima”, a boat carrying the Mayor and other city dignitaries. Still today, on board this boat, the marriage rites with the sea are celebrated through an evocative ceremony, of a ring being launched into the water, and the religious ceremony afterwards, at the church of San Nicolò on the Lido.

The programme ends with the Venetian rowing competition and numerous other events. Furthermore, the feast is an opportunity to celebrate “Adriatic Twinning”, when the Serenissima is united to a city or geographical area that had a special relationship with it, in the past. They may have been linked culturally by a mutual love of the sea or activities connected to it. It is also an opportunity for awarding the “Osella d'Oro della Sensa” prize to organizations and private citizens who culturally, commercially, or through craftsmanship, have brought prestige to the city.

Today, the “Sensa” is an opportunity for a big get-together, and being conscious of Venetian history and traditions: the city's celebrations and its relationship with the sea.

Regattas of the Sensa

Course of the regattas

Basin of San Marco - Riviera St. Nicolò,
where to follow the prize-giving will take place