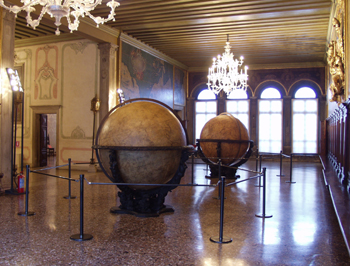 The tour through the various Institutional Chambers in the Palace begins in the Square Atrium. These were the rooms which housed the organs of a political and judicial administrative which was the envy of Europe for centuries, due not only to its immutability (in spite of the absence of a written constitution) but also to its ability to resist the passage of time and still maintain social peace and harmony.

The Clock Tower is one of the most famous architectural landmarks in Venice, standing over an arch that leads into what is the main shopping street of the city, the old Merceria. It marks both a juncture and a division between the various architectural components of St. Mark’s Square, which was not only the seat of political and religious power but also a public space and an area of economic activity, a zone that looked out towards the sea and also played a functional role as a hub for the entire layout of the city. In short, the Tower and its large Astronomical Clock, a masterpiece of technology and engineering, form an essential part of the very image of Venice. For more than 500 years, they have measured out the flow of life and history within the city. 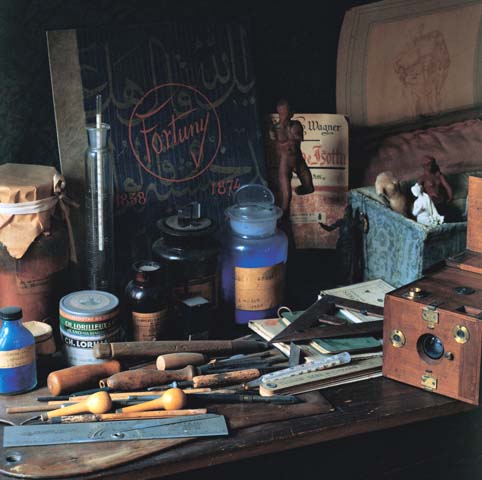 Fortuny Palace is situated in the Gothic palazzo Pesaro degli Orfei in Campo San Beneto; the building was transformed by Mariano Fortuny (Granda 1871 - Venice 1949) into his own atelier of photography, set-design, stagecraft, fabric-creation and painting. The Fondazione Giorgio Cini is an internationally recognized cultural institution which continues to draw inspiration from its original vocation and at the same time plays a leading role as
a center for studies and a venue for meetings and debate on current issues. Its academic activities – research projects and events aimed at improving our “knowledge of the world” – continuously interact with thinking on the current political and social scene aimed at promoting multidisciplinary approaches and experimenting with exchanges between forms of knowledge and various scientific and professional cultures. 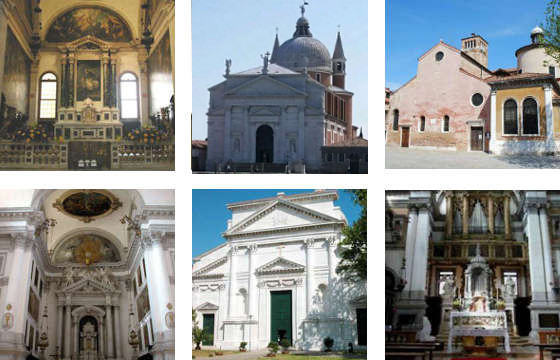 The aim of Chorus is to contribute to the safeguarding, conservation, restoration and valorisation of the architectural and artistic heritage of churches in the city of Venice and elsewhere in the Patriarchate. Chorus also helps promote study and knowledge of the history of this heritage, involving all those who love it in its safeguarding. 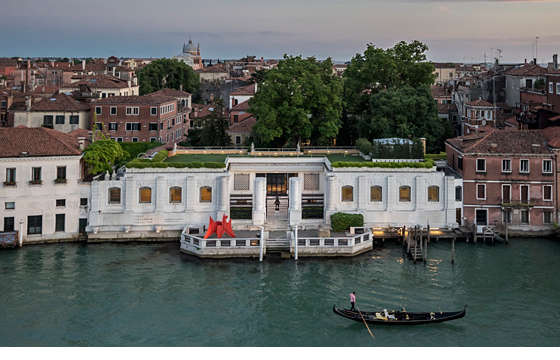 The Peggy Guggenheim Collection is the most important museum in Italy for European and American art of the first half of the 20th century created by the American heiress Peggy Guggenheim.
It presents masterpieces by Picasso, Magritte, Chagall, Kandinsky, Pollock, de Chirico, hosts the Hannelore B. and Rudolph B. Schulhof Collection, the Gianni Mattioli Collection, with works by Balla, Boccioni, Carrà, Modigliani, among other, the Nasher Sculpture Garden, as well as temporary exhibitions.

The Venice Biennale was founded in 1895 and it is now one of the most famous and prestigious cultural organizations in the world. Roberto Cicutto has been its President since 2020. La Biennale, who stands at the forefront of research and promotion of new contemporary art trends, organizes exhibitions and research in all its specific sectors: Arts (1895), Architecture (1980), Cinema (1932), Dance (1999), Music (1930), and Theatre (1934). Its history is documented at the Historical Archives of Contemporary Arts (Asac) that recently has been completely renovated. 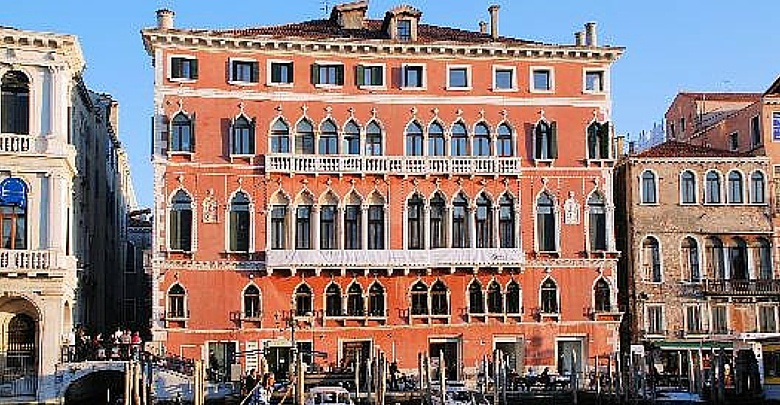 Palazzo Bembo is a famous building on the Grand Canal with a wonderful view over the Rialto Bridge. Since 2011 it is an art exhibitions venue.

The Bevilacqua La Masa Foundation deals with contemporary art, organizing exhibitions and meetings dedicated to the promotion of young artists and to the presentation of established ones, renowned at an international level. The school of devotion and charity dedicated to Our Lady of Mt. Carmel gained its official recognition from the Council of Ten on 22 September 1597, and was elevated to the status of Grand School in 1767.
The confraternity built its present headquarters (designed by the architects C,austello and Longhena in the 17th century) beside the church belonging to the Carmelite monks. There the confraternity had its initial headquarters and an altar dedicated to the Virgin. The original antique furnishings inside the halls of the school have been entirely preserved. These consist of important oil paintings, rich stucco ceilings and original embroidered and carved wood. 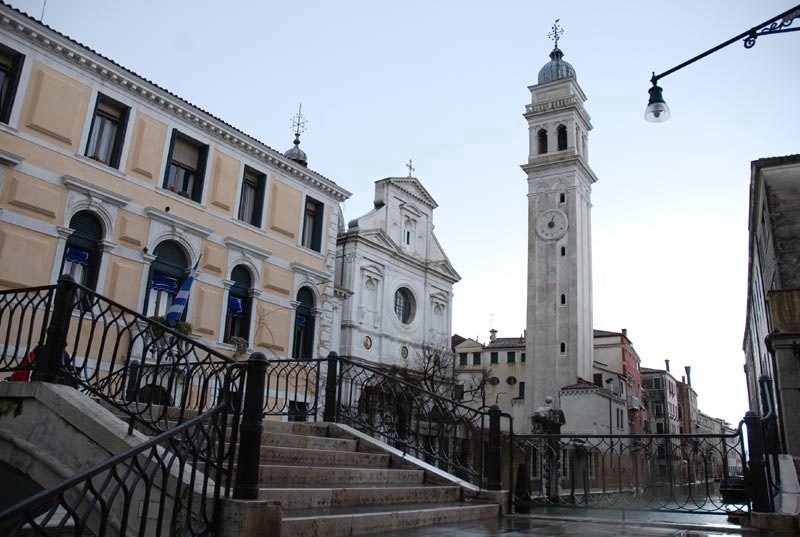 The Hellenic Institute of Byzantine and Post-Byzantine Studies in Venice is Greece’s only research centre outside Greece itself.
The Institute was founded in 1951, following a cultural agreement between Italy and Greece signed in 1948. In 1953 the Greek state donated to it the moveable and immoveable property of the historic Greek Orthodox Confraternity in Venice. The Confraternity had ceded this property to the Greek state, on condition that the state would guarantee its material support.
Housed in the building of the former Flanghinis College, the Institute began to function in 1958, on the completion of major, radical restoration work on the Confraternity’s buildings.
The Institute’s main objectives are to carry out studies in Byzantine and Post-Byzantine history — focussing primarily on the history of Greek territories under Latin domination, on the basis of Italian and in particular Venetian archives — and to publish the relevant historical sources.
Research in archives and libraries is carried out by Greek graduates, who receive a scholarship in order to prepare doctoral theses and other studies on topics in the history, art and literature of the Greek regions under Venetian rule, and also on aspects of the history and activities of the Greek Confraternity in Venice. At the beginning of the 16th century, Antonio Grimani gave his sons the family house at Santa Maria Formosa: later, on the advice of celebrated architrects such as Jacopo Sansovino, Sebastiano Serlio e Andrea Palladio, Antonio’s grandsons – Vettore, a Procurator of St. Mark’s and Giovanni, the Patriarch of Aquileia – substantially altered the building and gave it a classical stamp.
The palazzo housed Giovanni Grimani’s archaeological collection, one of the finest of the time, which was strikingly displayed on shelves, mantelpieces and plinths in settings such as the specially designed Tribuna and the courtyard.
The decoration of the rooms is of extraordinarily high quality, with outstanding stuccowork and frescoes reflecting the confidently unconventional taste of the Grimanis and executed by Mannerist artists such as Giovanni da Udine, Francesco Salviati, Camillo Mantovano, Francesco Menzocchi and Federico Zuccari.
All this makes Palazzo Grimani unique in Venetian history and architecture, a fascinating treasure house of cultural, artistic and historical riches and, now that its restoration has been completed, a museum of itself and of a few choice examples of the taste underlying the creation of the family collections in the 1500s. 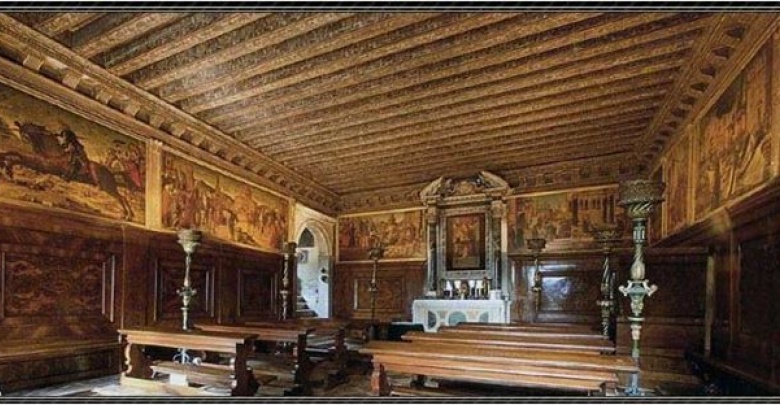 Famous painting cycle by Vittore Carpaccio depicting the lives of Saints George, Tryphon and Jerome.
Commissioned by the Dalmatian colony (known as Schiavoni) at the beginning of the 16th century, the Guildhall contains an important cycle of paintings by Vittore Carpaccio that portrays episodes from the life of St George.