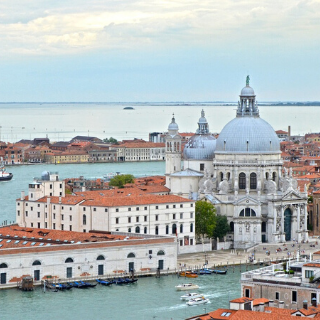 The Dorsoduro district in the south west of the city is among the areas with the highest density of artistic and cultural attractions - museums, churches, traditional boatyards and ateliers making rowlocks, masks and ceramics. It is also the perfect place for those simply wanting to get away from the crowds and enjoy the peace and quiet of picturesque and intriguing corners of the city.

If this particular part of Venice is new to you, the "classic" itinerary covers the entire area, passing near the most important museums, churches and places of interest.

The itinerary starts at Piazzale Roma, but you can obviously follow it in the opposite direction, or begin it wherever you like. So let's set off… obviously accompanied by a good map of the city.

From Piazzale Roma, turn immediately right and cross the curious group of bridges known as Tre Ponti (Three Bridges), then continue along the fondamenta (quayside) with the same name alongside Rio Novo. After Ponte dei Ragusei, Calle Nova and Ponte and Calle del Forno, you come to Campo Santa Margherita.

The place names in Venice are unique. There is only one "piazza", Piazza San Marco... the name "campo" ("field") given to the other squares derives from the fact that until 1500 there were very few paved areas in the city and all the squares were, in fact, grassy fields.
Campo Santa Margherita, one of the city's liveliest and most interesting squares, is enchanting with its fish stalls, cafés, restaurants, excellent ice-cream shops, ateliers selling masks and craftsmen working ceramics and wood. The unusual building standing on its own on the south side of the square was once owned by the Scuola dei Varoteri, the confraternity of vair furriers who specialised in the fine Siberian squirrel fur used to decorate garments for the nobility. The 14th century Casa Foscolo Corner (above the bank) is also delightful and the former church of Santa Margherita (now converted for residential use) has a distinctive truncated bell tower.

A deviation if you have time. Turn left. At the foot of the Ponte di Santa Margherita, the Church of San Pantalòn has a surprising 17th century ceiling entirely painted by Fumiani, 443m² of interconnected paintings which took the artist about 20 years, unique for Venice.
Leave Campo Santa Margherita and continue towards Campo San Barnaba in the direction of Accademia. Moored near Ponte dei Pugni there is a picturesque fruit and vegetables boat.
Campo San Barnaba is lined by interesting ateliers and an excellent ice-cream shop. 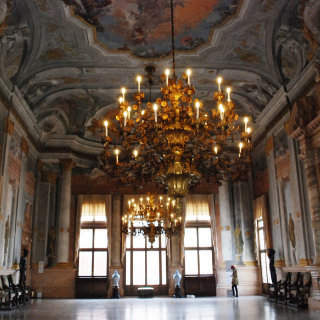 If you have time, just a stone's throw from Campo San Barnaba on the left of the church stands Ca’ Rezzonico. Not many Venetian mansions are open to visitors and if you like the idea of visiting one, it is worth taking advantage of the occasion. This monumental building was begun in 1649 by architect Baldassare Longhena, but the financial collapse of the commissioning family prevented its completion. The powerful Rezzonico family bought it in 1751 and commissioned Giorgio Massari to take on the project. When the family died out, the building had a succession of owners until it was bought by the City Council who converted it to a Museum, recreating the setting of a prestigious 18th century mansion, with fine lacquered or gilded ebony furniture, velvet and damask, the alcove, fine paintings by the vedutisti, Canaletto and the Guardi, frescoes by Tiepolo and intricate Murano glass "ciocca" chandeliers.

Go straight down Sotoportego del Casin dei Nobili and Calle Toletta as far as Ponte dele Maravege, then continue on the left and a few minutes after the bridge you come to Accademia.
The canal running under the Ponte delle Maravege is known as Rio di San Trovaso. The scene here is truly picturesque, with fine 15th century buildings and the Church of San Trovaso looking out over a grassy square. Trovaso is not a local saint, but rather the result of a phonetic contraction of the names of the two saints Gervase and Protase. The church contains an interesting Last Supper by Tintoretto painted in 1564-66, highly original for its portrayal of the dismay of the apostles who seem literally to fall off their chairs to the ground. There is also a beautiful 15th century panel of Saint Chrysogonus on horseback by Giambono, a superb example of international Gothic in Venice. Alongside the church you can see one of Venice's oldest boatyards where gondolas are made and maintained.
The 17th century building made almost entirely from wood can be seen from the quayside.
Before emerging onto Fondamenta delle Zattere, we recommend a not-to-be-missed pause in the osteria at the foot of the bridge to taste the excellent cicheti (the Venetian equivalent of tapas) accompanied by a good glass of wine. 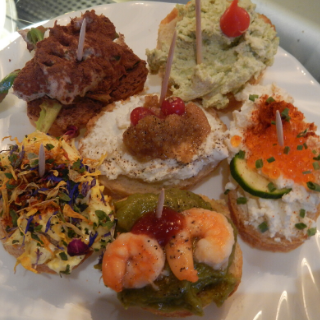 The Accademia Galleries contain the richest collection of Venetian school paintings, from 14th century gold-ground panel paintings by Paolo and Lorenzo Veneziano to the glorious Settecento of the vedutisti and Tiepolo, passing through Bellini, Carpaccio, Giorgione, Titian, Tintoretto and Veronese. Don't miss such masterpieces as the large 15th century panel paintings belonging to the Scuola di San Giovanni Evangelista and Sant’Orsola, Titian's Pietà, and Giorgione's Tempest.
In front of the museum there is a wooden bridge, Ponte dell'Accademia, across the Grand Canal to the San Marco district. At the sides of the bridge there is also the landing stage for boat lines 1 and 2 direct to San Marco.

If you want to continue your exploration of Dorsoduro, go down Rio Terà Foscarini, turn immediately left into Calle Nova di Sant'Agnese and proceed towards La Salute. You will pass through an oasis of peace and quiet among bridges, canals, the Palazzo Cini, mansions and the famous Peggy Guggenheim Collection. There is a splendid small square, Campiello Barbaro, where you can see the famous Palazzo Dario and a little further on, the not-to-be-missed rowlock atelier of Saverio Pastor along the Fondamenta Soranzo. This brings you to the furthest part of the district, Campo della Salute and Punta della Dogana, from where you can admire a delightful view across the San Marco basin, island of San Giorgio Maggiore and San Marco wharf.

The grandiose and grandiloquent Church of La Salute was built in 1631 as a votive offering against the plague. Designed by Baldassare Longhena when just over 30 years old, it became the destination for a ceremony to commemorate the end of the epidemic which cost the life of one third of the population. Not to be missed in the sacristy, Tintoretto's Wedding at Cana, together with a number of works by the young Titian.

The imposing building at the far end of the island is the old Dogana da Mar customs-house. Dating in part from the 15th century, it was reconstructed in the 17th century and again in the 19th century. Abandoned for about 30 years, it reopened its doors on 6 June 2009 after major restoration by Japanese architect Tadao Ando and now houses the François Pinault Foundation's Contemporary Art Center.

You can cross the Grand Canal by boat from the La Salute line 1 landing stage or by gondola ferry from Punta della Dogana to San Marco Vallaresso, or after the Ponte della Salute bridge, Santa Maria del Giglio.